My memoir, How to Dress a Dummy, began as a Creative Writing Master’s thesis – a feminist critique of the beauty industry. The creative component was a recounting of my experiences working as an international model.

A member of my writers group told his publisher about my secretly-always-wanted-to-be-a-book thesis. The publisher then contacted me, asking if I could turn my 15,000 words into what it had always wanted to be.

Once the elation from signing a contract with my name written alongside the word ’author’ subsided, I spiralled into a bout of mental paralysis. A book? What was I thinking? Why would anyone want to read about my life?

Feeling like an imposter, as I so frequently do when it comes to anything that matters to me, I came to the most obvious conclusion: my publisher had a clandestine drinking problem, he was poleaxed when he had offered me the contract and in any minute I’d receive a call from the rehab centre when, finally sober, he realised his egregious error.

Thankfully, for my book’s sake, I had a fast-approaching, inescapable deadline and a thematic compass to guide me. I knew that I wanted to analyse the various ways women are influenced by various sources, particularly the beauty industry, to internalise sexism. I aimed to use my own story as a device to explore these themes.

What I found though, as I started to sort through my past to see which parts fit my purpose, was that life is messy.  I could see no clean chronology of events to weave into a neat narrative fabric. Where to begin? Perhaps when I started caring about the way I looked? I was a weird kid. Not only was I socially awkward, I was tall and gangly with a giant forehead, a constant rash on my face and a white wispy bowl cut. Due to the aforementioned attributes I wasn’t exactly knocking back party invites, so I spent most of my time with my nose either stuck in book or pressed against the television screen. Through these mediums (essentially my friends/mentors/guardians) I gleaned that a woman’s worth was inexorably linked to her beauty. The Brothers Grimm to CS Lewis to JRR Tolkien, and then on to Lucy Maud Montgomery, F Scott Fitzgerald, Charles Dickens, Leo Tolstoy. A woman, my precious stories taught me, was secondary and her appearance ordained her fate. And I knew, in my heart of hearts, that if I were beautiful all of my problems – having no friends, no romantic prospects, nobody to watch Nightmare on Elm street with – would be fixed.

That early immersion in stories about the power of beauty created the fertile ground in which my concerns around body image begun to germinate.

But as I continued to pick at the threads of my past I saw many other factors that contributed to the damaging beliefs I developed and sent my fate hurtling in a specific direction, namely towards the pursuit of being seen above everything else. The boy I loved at school who responded with palpable revulsion when he discovered I had a crush on him. The raucous laughter of my peers when someone verbally entertained the prospect of ever kissing me. My first shot of vodka at eleven years old that made me feel, for the first time ever, less lonely despite nobody else being there at the time. The man in his thirties who showed keen interest in my developing teenage body.

How I carried my new body around, dragging vanity and shame along with me, like

an old bickering couple. How Sex became a thing separate from me. Too scared for the actual act, it manifested in my body language, clothes, make-up. As I smothered my shame, my lust became muted also, the two so inextricably tangled. Unconsciously I began trading my sexuality (my desire) for sexualisation (men’s desire), as so many young girls are taught to do. All those moments thereafter when I chose to make my body a priority over my mind, a path tread over and over until it formed a fixed way of being. 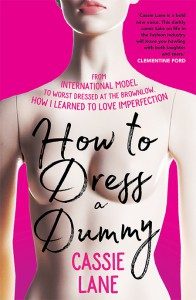 As I kept examining my past, I began to see that self-objectifying, seeing myself as an object who is acted upon rather than a person who has agency, had more ramifications than just wanting to be pretty and developing an unhealthy attitude towards food.

I saw the adverse effect it had on my sexual development, my career choices, my friendships, my romantic relationships, my drinking habits and my eventual drug abuse. Seeing myself as an object first and foremost meant I became what others wanted me to be instead of pursuing my own desires and ambitions. Instead of acting, I reacted to others.

As I unravelled the fabric of my life, searching for thematic relevance, I felt like a beagle hot on a scent. I knew I had an important story to tell. Yet none of the memories I unearthed were things I wanted to share. I had no choice but to force myself into a sort of self-imposed amnesia: to forget that my writing would ever be seen by another set of eyes, let alone, possibly, many sets.

The thing is, I never wanted to write a book about the obvious ways women experience sexism in a clearly patriarchal world. That’s been done. I wanted to explore the ways we internalise messages and become complicit in our own undoing. I wanted to confess all the ways that I had actively chosen to hate myself, hurt myself and even to perpetuate the messages that caused other women to do the same. I needed to reveal all of the ugliness that came with wanting so desperately to be beautiful. Only then could I start to heal the wounds and make art of them. Only then could I hope to rewrite the script.

Cassie Lane is a freelance writer based in Melbourne. Her first book, How to Dress a Dummy (Affirm Press 2017), a funny, candid memoir about working as an international model, is also a covert device to spread feminist propaganda and brainwash the masses. She has written for Sunday Life, Daily Life, The New Daily, WHIMN and Sunday Herald Sun and she has completed a Master of Creative Writing and Editing at the University of Melbourne. Cassie’s obsessions include anything that is the colour teal, sloth videos and Joe Biden, not necessarily in that order.

Online In-conversation with Ramona Koval about her book A Letter to Layla via Better Read Than Dead, 12th October at 6:30pm.

Online Discussion of Lucy Grealy’s Autobiography of a Face via Heroines Festival, 18th October at 12noon.

Online Q&A about my Memoir Imperfect via Heroines Festival, 7th November at 7pm.