Writer’s block, as I discussed in my previous post, is a common, and debilitating, phenomenon among writers. The good news is it is possible to fight this condition, but the trick is to find what works for each of us. Here I’ll share strategies that some writers, myself included, use and, hopefully, you’ll find something useful for you too, to take the edge off this affliction, or even prevent it all together.

Let’s start with one of the most famous examples of writer’s block – that of F. Scott Fitzgerald, whose frequent bouts of this condition are forever imprinted on the history of modern literature. In response, Fitzgerald consumed alcohol liberally, often going on a bender (gin was his favorite medicine). But then, it is also possible that it was his drinking that caused much of his blockage, which intensified in his final years. Still, this isn’t a cautionary tale. I suspect that more moderate amounts of booze may prove useful to some for seducing our inner muses.

Personally, though, although I like to drink, when I write, even a few sips of alcohol turn my brain to mush, ruining my working day. For those of us needing a more wholesome plan, the American philosopher and writer Daniel Dennett offers the following:

My strategy for getting myself out of a rut is to sit at my desk reminding myself of what the problem is, reviewing my notes, generally filling my head with the issues and terms, and then I… go do something relatively mindless and repetitive. At our farm… I paint the barn or mow the hayfield or pick berries or cut fire wood to length…. I don’t even try to think about the problem, but… engaging my brain with something else to control and think about helps melt down the blockades… freeing up the circuits for some new paths.

Not about to own a farm in any foreseeable future, I still find Dennett’s method useful. Since my spell of three-year-long writer’s block, I have begun incorporating physical activity into my writing routine. I try every hour to do some such ‘mindless’ activity: sweeping the floor, walking to the shops, attending gym. When I feel particularly stuck, or generally uninspired, I may take longer walks or go swimming. These interludes often help if not to unlock something inside me, then at least improve my mood. Whereas for Diana Jenkins, Sydney-based writer, running is ‘enormously clarifying when I’m having trouble sorting out some issue in my writing; I can’t tell you the number of times running has dislodged some stubborn mental block.’ More about the role of physical activity in the writing life can be found in my blog post Writing from the Body.

Hilary Mantel is also in favor of ‘mindless’ activity, which she extends to such rather more appealing activities as baking, meditating or sleeping. She also stresses the importance of solitude during these vulnerable times:

Don’t make telephone calls or go to a party; if you do, other people’s words will pour in where your lost words should be. Open a gap for them, create a space.

This advice makes a lot of sense to me. However, at least in my experience, all these ‘mindless’ activities are most effective in preventing rather than ‘curing’ writer’s block. When that affliction hit me, no amount of physical, or baking, activity helped me.

Another strategy to prevent the onset of writer’s block comes from another famous sufferer – Hemingway. A bullfight aficionado who fought in the First World War and reported on the Spanish civil war, when asked about the most frightening thing he had ever encountered, Hemingway said: ‘A blank sheet of paper.’ And here is his advice how to conquer this terror:

In a similarly preventative fashion, Australian writer and editor Dmetri Kakmi manages to shorten his spells of writer’s block by adhering to a strict writing discipline:

I treat writing like a job. Whether I want to or not, I sit at the computer at nine o’clock and write until midday. Half an hour later, I start writing again and go till two. I follow this routine five days a week. It trains the mind. Meditation four times a week helps too. Now, crippling days last maybe two or three days. In the past they would go on for weeks.

But what if the writer’s block is already there, its claws deep in our skin? Anne Lamott, the author of one of the most loved books on writing, Bird by Bird, is no stranger to this affliction. Her advice is straightforward and sensible: even blocked writers need to keep engaging with writing until, hopefully, the block will lift. Lamott suggests we write daily, even just ‘three hundred words of memories or dreams or stream of consciousness on how much they hate writing — just for the hell of it, just to keep… fingers from becoming too arthritic…’ 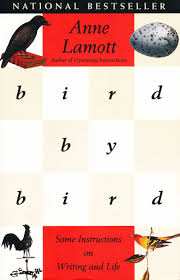 Josiane Behmoiras, Australian author of Dora B, prone to getting beset by what she calls ‘The Desperate State of Wordlessness’ whenever she starts something new, follows a similar method. But while she gives herself license to produce ‘bad’ work, her word count must relate to the project-at-stake:

I aim for 400 words a day, steadily rucking up a lavatorial draft. For me, the actual act of defacing a white page with my gabble is the only way of uncovering the narrative I need to tell.

Raymond Chandler emphasises not the amount of words, but a set amount of time. You don’t even have to write, just sit at the desk regularly. The catch here – you cannot do anything else. Such an approach may take some pressure off the writer to produce, lessening the anxiety, with the hope that after some time, the writing will resume more naturally.

Hunter S. Thompson goes even further in his lowering of expectations as a way to combat writer’s block. Forget about your own words! Instead, Thompson would re-type works of his favorites – coincidentally, the aforementioned Fitzgerald and Hemingway – to ‘feel the music’ of their voices through his fingers, which, in turn, helped him tap into his own voice. Legend has it that Thompson copied the entire The Great Gatsby in order to write Fear and Loathing in Las Vegas. 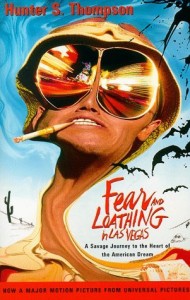 When I recognize my early signs of writer’s block– excessive procrastination, anxiety at the mere thought of approaching my project, aversion to my sentences, feeling overwhelmed – I also lower my expectations. But this strategy works for me only as long as I engage in a certain self-talk while trying to meet my sometimes-ridiculously-low word or time quotas. I remind myself that I don’t have to accomplish much in one day, because writing is a slow, gradual accumulation of words and crystallization of thought. I also tell myself that there is no formula for good writing, that the constellations and rhythms of words in my daily thoughts and speech may suffice to constitute decent prose.

Even more importantly, at such times of internal turmoil I try to imagine that my writing is not about making art, but rather it is correspondence with one intelligent and non-judgmental friend, to whom I tell my story. This too takes off some pressure. And sometimes I focus on what I enjoy possibly most when I write – free-associating and taking random notes not just on, but also around, my project. This activity reminds me that writing doesn’t have to always be painstaking. To succeed with this latter strategy, I write fast, so there is no time left to revisit, and hate, my work.

Roxane Gay, American writer and commentator, discards the act of writing altogether when creative paralysis strikes. Instead she engages in what she calls an ‘intellectual change of scenery’:

I either turn to reading or movies to try and rattle things in my brain. Mostly, I want to forget what I’m working on and what has me feeling so stuck because obsessing over being blocked only makes me more blocked… When I get back to the writing, I read the piece aloud until I get to the place where I am stuck and oftentimes, that act of recitation helps me…

I like Gay’s notions of changing intellectual scenery, and also changing perception from the visual to auditory. For me, however, her methods did not yield success. The change of scenery that I do find useful is more literal. When feeling blocked, I often write in cafes.  This incompatibility between Gay’s approach and mine brings me back to the starting point of this post – the singularity of our writerly battles. Thompson again: ‘I hate to advocate drugs, alcohol, violence or insanity to anyone, but they’ve always worked for me.’

And what works for you?