‘I am, at heart, a gentleman,’ drawled the iconic German movie star. A century ago, Marlene Dietrich was taking liberties: she wore well-cut men’s suits when this was considered insolent. She took lovers, of both sexes. She was disobliged, and this gave her power, and access. (She also had that incredible voice.) Authors take liberties, too. One of the privileges of the writing life is that we get to try on other sexes and walk around in them, sometimes for years at a time. But how well do they fit? Are we convincing or is there always a mild ‘uncanny valley’ effect? Within the cloistered literary world, there is ongoing debate about this. In some ways it seems an odd conversation to still be having, and yet it persists.

The story goes that when a well-known editor saw the beginnings of Donna Tartt’s The Secret History, he assured her it would go nowhere because ‘no woman has ever written a successful novel from a male point of view’ (‘The Slate Book Review author-editor conversation’ Michael Pietsch and Donna Tartt, The Slate Book Review, 11 October 2013). Tartt was 21 at the time, and rattled. But she recovered, as writers must, and finished her fine novel with its first-person male narrator.

There are countless more examples of powerful, authentic characters written across gender. Annie Proux’s Quoyle. Tolstoy’s Anna Karenina. Colm Toibin’s Eilis. Marilynne Robinson’s Ames. Etcetera. Of course it can be done! And done exquisitely. There are also countless examples, however, of less successful attempts. And this doesn’t seem to correlate in any simple way with how well one writes. (It’s been argued, incidentally, that women writers have the advantage here, given the cultural prominence of the male point of view.)

So I guess it’s unsurprising that after publication of my second novel LEAP, where the narrative is shifts between a twenty-something man and a forty-something woman, both in mourning, some of the questions most frequently asked of me were: How did I write Joe? Where did he come from? How did I inhabit him physically? (Joe largely expresses his emotions through his body, particularly through the practice of parkour.) And the share-house where Joe lives with his roommates – how would I know what young men do and say behind closed doors? I was ostensibly nearer to the other main character, Elise, a mother of young adults with a secret smoking habit. 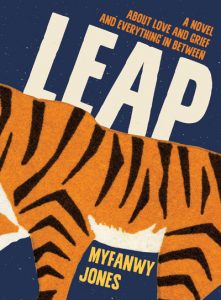 In truth, until LEAP, I’d supposed I was one of those writers who wouldn’t be able to do close male characters. In a gross failure of imagination, for most of my life men had seemed other – objects of curiosity, yearning, fear and fascination. I felt locked out of the male brain. (I did cut into a young man’s brain in first year neuropsychology but it didn’t much help. It was grey, disappointingly soft and pliant, and stunk of formaldehyde.) I assumed that the men in my stories would need to be held at a distance – as is the case in my first novel, The Rainy Season. This sits with psychologist Vivian Diller’s suggestion that ‘authors who write about their own gender use their internal experience and speak from the inside out. When they write about the opposite sex, their perspective has to shift – from the outside in.’ (The Mixed Results of Male Authors Writing Female Characters’, Michele Willens, The Atlantic, 2 March 2013).

Then, between my first and second novels, I experienced an extended writing drought – three and a half years when nothing I wrote made any sense or beauty. Feeling mildly desperate, I took a trip, alone, to try to corner some inspiration. And while I was away from home, Joe appeared. He arrived in an entirely different manner than any of my previous male characters – he was the first to insist upon himself. There he was on page 1, opening the door to the ethereal nurse, with his bare feet and hovering, flexing intent. And for the entire first draft I didn’t once stop to think, what would Joe do? Joe just did. As he ran up walls, languidly worked the coffee machine, masturbated over his dead lover and tried hard not to dream, I was in turn possessed, and obsessed. Joe was of me and not of me – as all our characters are – but I am Joe in a way that I couldn’t be Hugh or Tim, the characters from my first novel. I considered Hugh and Tim from a wary distance and then put them under a microscope, like I did with the slices of that brain. So there is something interesting here, as Diller says, about where the writer is standing in relation to their character. It just doesn’t necessarily hold, perhaps, that we can’t write across gender from the inside out.

In between drafts of LEAP, I researched to put more flesh on Joe’s bones. I met with traceurs at bridges to try to see the environment through their eyes and watched endless parkour clips, as Joe does, to learn moves and sequences. I frequented a café on High Street to chat with its barista who fit the profile (poor chap). All of this helped build Joe as a character but the essence of him was already there. It’s hard to be clear about what allowed me to inhabit Joe and not the others. Partly, it might just be growing older; perhaps a changing relationship to and with my father, who first taught me about words and how to run them together – the pivot of his own life; and, certainly, being in the daily vicinity of two teenaged sons and their friends, whose physicality, ferocity and humour I finally see as not all that different to mine. But I think it was the particular way in which Joe grieved and worked through his guilt () that was most  familiar to me (I also lost friends in late adolescence) and ‘male’ only in some narrow cultural sense.

‘I can’t help thinking of Jung and his anima/animus idea when speaking about writing and gender,’ Alec Patric said to me recently, after being asked in an interview how he’d managed to write the heroine of his brilliant new novel Atlantic Black. ‘We all have male and female elements in our being, which we encourage or suppress through social conditioning. But Katerina? She is my soul.’

I swear his eyes misted over at this last bit. Which made me reflect on the joy I also took in being Joe. For a novel about grief, I had a very good time writing it, and at least part of this was pleasure in laying claim to some masculine territory. Just as we never doubted Marlene was both a gentleman at heart and a glorious woman, it seems pretty obvious that we are all less restricted, or obliged, than we might at first appear – even to ourselves.

Myfanwy Jones has worked as a freelance writer and editor for 20 years. She is author of The Rainy Season, shortlisted for The Melbourne Prize for Literature’s Best Writing Award 2010, and co-author of the bestselling Parlour Games for Modern Families, winner of the ABIA Book of the Year for older Children 2010. Myfanwy’s second novel, LEAP, was longlisted for the Voss Literary Prize and shortlisted for the 2016 Miles Franklin Literary Award.