Please forgive me this self-indulgent post, which is this time a brief report from the book launch of my memoir The Dangerous Bride. In my defence, I am such a slow writer that I promise not to inflict upon you another such post sooner than in 3-4 years (and even this is an ambitious estimate).

The last time I published a book – I will love Christina, a novel in Hebrew – was eleven years ago. I then already lived in Australia. Yearning to celebrate the release of a book that I spent three years writing, I quit my day job and flew to Israel. I was all set to organise a party when my publisher, embarrassed, notified me that the truck carrying my freshly printed books was… hmm… stolen. And there was no way they’d manage to do another print during the three weeks of my visit. To this day I’m not sure who felt worse about that fiasco – I who gave up a job and flew all the way to Israel or the thieves who probably hoped for something better than 2000 copies of a novel which is not even a Harry Potter…

So no wonder this month I was truly thrilled to finally being able to host a book launch. About hundred people gathered at Readings in St Kilda on this last Saturday to help me celebrate. Maybe some of you, Dear Readers, recognise yourselves in this photo? 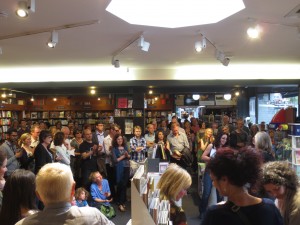 We did some serious wine-drinking there (well, at least I did…) and munched on Israeli chocolate pastries, rogaleh. Sally Heath, my dear publisher who believed in this book and picked it from that mythical pile of unpublished manuscripts, opened the evening, drawing a funny, and very true, parallel between the manoeuvres of non-monogamists and those of politicians (with the latter featuring on MUP’s list much more frequently than the former).

Sally then gave a terrific introduction to the truly wonderful writer and historian Maria Tumarkin, saying her writing is ‘life-changing’. If you’re interested to know more about Maria, here is her website: http://mtumarkin.com/

Maria was the one who recommended my manuscript to MUP and her generous support has been invaluable, but the reason I asked her to launch my memoir has nothing to do with my personal gratitude. The truth is, I am a huge fan of Maria’s work. She is one of my favourite Australian creative nonfiction writers. Her way of thinking about the world is truly original and exciting, and I hoped she’d be interested to engage with my work.

I was moved to tears as I listened to Maria talk about my book as for the very first time since I’ve written it I felt truly understood, that what I wanted to convey through writing did come through. I don’t mean to be self-congratulatory but I do want to quote here briefly from Maria’s speech, just where I felt she particularly cut to the heart of what I was trying to do:

Lee is as averse to the self-help culture as she is to the feminist manifestos of the 101 variety. My feminism, she writes, is that of femme fatales in the classics I’d grown up with: ‘dark, practical, full-skirted, scheming, shimmering with bare skin and jewels’. She remains unaligned and unaffiliated in her quest, which is always personal and intellectual at once. She rides this one on her lonesome as bandwagons slide past – nicely equipped and airconditioned, those bandwagons.
It’s not that she is a heretic. It is that she is that rare thing – an unreconstructed romantic.
Everywhere she goes, people get funny when she brings up romance. What do you mean? they ask her. It’s an odd word, annoyingly infantile in the mouth of a grown, worldly woman, it’s a very ideologically loaded word too, plus, of course, it has been cheapened by all the Hollywood fare, the whole commodification of romance business. She is clearly a very smart girl, so what the hell is she talking about? Do you mean ‘the constructed façade of intimacy?’ one man asks. Do you mean red roses and scented candles? Lee herself struggles to articulate what she means, except she knows in her gut this is what she is after. This thing that makes time stop. That makes you feel more alive than you thought possible. That makes you feel like you haven’t settled for something that is only 10% of what you crave, that you haven’t, in the heart of hearts, lied to yourself or your partner.

After Maria’s speech, we proceeded to a conversation, covering in about 20 minutes quite a few themes: from writing in a language that isn’t your mother’s tongue to choosing (or being chosen by) a literary genre, to coping with mortality and the writing of sex scenes among others.

The so-called ‘formal’ part ended with the Israeli-Australian chellist and singer Adi Sapir performing a version of Nick Drake’s Northern Sky and her original song in Hebrew Angel’s Face https://www.youtube.com/watch?v=XDO9hXOXHRo

The party continued on with book signings and wine drinking and chatter. My head is still reeling with all the memories (and, well, with hangover…). 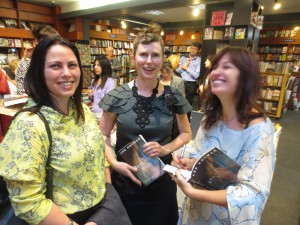 Thank you, Dear Readers, for your generous support and participation in my joy!