Some memoirs are written from the bottom of a heart that has been burdened with an unresolved story. Such was my memoir, Dora B (reprinted with a new title, My Mother Was a Bag Lady), in which I wrote about my mother at the time she was still living on the streets in faraway Israel. I didn’t have the means to go and rescue her. All I had was my pen, which I used to recover the memories of living with her and in this way I attempted redeeming the person she had been, acknowledging the immense love she had given me, which was, in turn, all she had had to give.

When I started writing I was dreading each day the inevitable misadventures that could befall my mother in her state of homelessness. My writing voice was that of trauma. This voice of trauma came out in fragments, snippets and peculiar images, like the silver teapot left on the dirt by a neighbour as he rushed to protect my mother from her enemies in the Israeli migrant settlement. My writing about my life with my mother imitated the action of a camera, panning over landscapes, people, objects, recording their configurations as they arranged and rearranged themselves on the world’s stage. I left for the reader to infer meaning from the text. I didn’t feel I needed explicit commentary about my emotional state: for wasn’t the ‘showing’ of my story in itself a colossal statement, an act that surpassed any attempt at explanation? 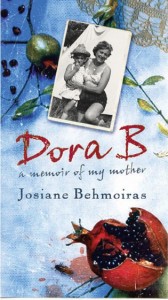 Three years before the manuscript was completed, my mother passed away. I had travelled to Israel and held her hand in a hospital bed, and back in the nursing home when she had been forcibly incarcerated. Without her freedom and independence, she had lost the will to live and was trying out an implicit hunger strike, eating the bare minimum to avoid being forced-fed.

From beginning to end of my memoir I kept that voice of trauma, showing, not explaining. When you tuck your mother into bed and sing to her a French lullaby – she remembers the song and hums along with you – and it is the last night of your visit, most likely, the last night ever of your joint life, what is there to explain?

The story of my mother ended fourteen years ago. Time heals the wounds, and the scars are somewhat fading. Now, when I read a passage from my book, I envisage all the ‘telling’ I could add to it in an act of expansion, of opening up the text to the world.

What is the telling that I would be doing now? What is it that you include in the space of reflection? And what of the show-don’t-to-tell edict? Reflecting upon the limitations I have imposed on my writing, I realise that memoir is at its best when the text is opened to both ‘showing’ and ‘telling’.

The show-don’t-tell mantra so often drummed-up in writing classes entirely misses the point. Telling is not about explaining the described ‘images’. It is rather about lifting the narrative to a higher plane. In all its forms, it ought to assist in reshaping private life experience into a metaphor or allegory for the greater story of the human race.

In the telling, the writer can draw from the vast compilation of private and collective memory, of cultural references, scholarly investigation and all other manner of research. In addition to those, the writer can (and ought to) include observations and thoughts that are not directly relating to the plot but instead allude to a certain mood and underpin the character’s actions. Those are not necessarily digressions (although they can be) but any details that tell us more about what makes the character/s who they are and elucidate their motives.

Turkish Nobel literature laureate, Orhan Pamuk, weaves a beguiling tale of intertwined showing with telling in his novel Strangeness in My Mind:

Hearing the things the city told him at night and reading the language of the streets filled Mevlut with pride. But when he went back to his rice cart in the morning and stood in the cold with his hands in his pockets, the power of his imagination waned, he sensed that the world was hollow and meaningless…

One of the things the city ‘tells’ Mevlut at night is that ‘… the shadow of the trees in some neighbourhoods moved even when there was no breeze at all…’ In this sentence, Pamuk demonstrates his mastery in both ‘showing’ and ‘telling’ us something within the same words, which is something I have aspired to do in Dora B. He shows the night shadow of trees, and then the text is unhinged by telling us about shadows that move despite the stillness in the air. The ‘showing’ is on the surface of the text: ‘the shadow of the trees moved’. The telling is about the magical element: the shadow of trees can’t move if there is no breeze, however, we can ‘believe’ that Pamuk, through his protagonist Mevlut, expresses the city’s mystical dimension. The narrative in this way is enriched. Perhaps the best explanation of ‘telling’ is that it is most effective when using a variety of methods alongside (or as well as) shadowing the showing.

In memoir, it could be that the act of telling in all its possibilities requires the author to take a certain distance from the personal state of trauma: writing down the events after attending to our heavy heart, which in the first place generated the urgency to write down our story.

Josiane Behmoiras is a Melbourne-based author. Her essays and short fiction have been published in various literary magazines and her memoir, Dora B, was published in Australia, the UK, Germany and France, and shortlisted for the NSW Premier Awards. Josiane has been teaching creative writing at various community settings and at The University of Melbourne, where she was awarded a creative writing PhD on the topic of the literary imagination of utopia and dystopia in times of instantaneity and ubiquity. She is a mentor and manuscript assessor. For more information please visit www.josianebehmoiras.com