When internationally renowned Israeli novelist Aharon Appelfeld was barely nine years old, he escaped a Nazi concentration camp in Romania, surviving by moving from one hiding place to another for the next three years. As an adult, still haunted by wartime horrors, he couldn’t work in confined spaces and wrote his novels in cafes of Jerusalem to where he moved in the aftermath of the Holocaust. In the memoir of his writing life, A Table for One, Appelfeld explained the necessity of cafes to him:

‘A man who has lost his home as a child will never have a home again’. I don’t know where I read this; perhaps it was what I told myself. Years ago a well-known author invited me to his home. He was wearing a blue dressing gown, he was in slippers, and he was ensconced behind a wide, heavy writing desk. I would have found such ‘comfort’ suffocating. When I work, I’m at a small café table, surrounded by people, and what I find myself writing there are things that the place evokes in me.

Indeed, Appelfeld used cafes not only as work spaces, but also as sources of inspiration. Repeatedly criticized for writing about the Jewish diaspora rather than life in Israel, Appelfeld has always been an outsider in Israel. The cafes he chose to write in were bubbles to where ‘sabras’, the native Israelis, rarely came. Most of their customers were European refugees who, like Appelfeld, dwelled simultaneously in the past and present. As a young writer, observing those café patrons, Appelfeld realised he’d found the subject matter for his future work and indeed, his novels focus on exploring the wounded consciousness of survivors. 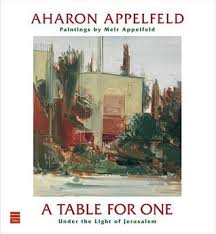 Cafes were also the places where Appelfeld honed his skills of observation and learned that crucial aspect of the writing craft – how to translate abstract emotions and ideas into vivid, particular descriptions:

At Cafe Peter, I learned to look carefully at the human body, its positions, its movements; a body tells you far more than words like ‘loneliness’ and ‘sorrow’.

Ernest Hemingway, too, favored café writing, at least during his time in Paris, which, like him, was then in her twenties. This was when Hemingway was still broke and in love and happy, way before turning earnest and bitter and joining Vladimir Nabokov’s camp of austere writers who work standing.

As with his women, Hemingway was never faithful to one café, but moved between many. The legendary Café de Flore and Les Deux Magots were among his favorite haunts and three years ago, on my pilgrimage to Paris’s literary landmarks, I saw his portraits still decorating their walls.

If for Appelfeld cafes were a necessity, and a path to artistic self-discovery, then for Hemingway they held romance. He wrote nostalgically in his memoir A Moveable Feast that describes his youthful stay in Paris:

The blue-backed notebooks, the two pencils and the pencil sharpener…, the marble-topped tables, the smell of early morning, sweeping out and mopping, and luck were all you needed [to write in Paris].

A sensual man, Hemingway associated cafes with pleasure. When he had some money, he’d feast on oysters and sausages while writing, and always – on the sights of cobbled sidewalks and Parisian women. He made friends with waiters and café regulars, usually writers or war veterans brandishing medals and missing body parts. It was in a café that Hemingway met F Scott Fitzgerald, who would become his literary friend and rival. However, unlike Appelfeld, in those days Hemingway didn’t draw his inspiration from cafes. His imagination was set towards America, but cafes fed it metaphorically and literally:

In the story [he was writing] the boys were drinking and this made me thirsty and I ordered a rum St James. This tasted wonderful on the cold day and I kept on writing, feeling very well and feeling the good Martinique rum warm me all through my body and spirit. 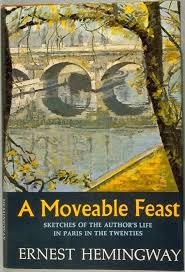 Like Hemingway, I too associate cafes with pleasure, indulgence, a moveable feast. Yet for me, as for Appelfeld, cafes are also imbued with urgency. Many times going to a café has helped prevent the onset of a writer’s block that, in my case, usually manifests itself as fear disguised as laziness, as ‘I can’t be bothered doing this now’. I go to cafes to deceive myself, because there somehow writing ceases being a chore or, worse, a test of my talent. Once I settle down, preferably on a comfortable couch, and order a latte, and possibly something delicious to eat, how can I call this ‘work’? Even as I open my laptop to begin a writing session, nothing feels serious. I can always stop, I tell myself, but the truth is – cafes discipline me in the way that the confines of a proper study don’t. Even in my most despairing hours, when I once again consider becoming a chef instead of a writer, cafe magic works itself on me. In that liminal space, where the outer world surrounds you but loosely and things always happen – you bump into people you know or hear an unfamiliar song that takes your breath away – something in my mind clicks, my fingers bounce panther-like onto the keys and the electronic page loses its virginity or gets knocked into some kind of a shape.

But for a café to work for me, it has to have particular conditions. It must be cosy but not dark – with plenty of windows to look out. The doors have to be closed so to create a clear delineation between inside and outside. The music must be low and moody – preferably jazz or to have some layered oddness to it, like Radiohead or Dead Can Dance do. The coffee must be strong but a little milky. And the place has to be devoid of the horror of mothers practicing permissive parenting, meaning – dreamily sipping decaf soy cappuccinos while their darlings bang on tables or gallop around, screaming their lungs out. The French bistro Moulin Noir in Port Melbourne, with his owner fond of Piazolla, met all these conditions until recently changing hands, and it was there that I managed to finish my memoir.

Nowadays it is getting harder to find cafes conducive to writing, those oases among the ubiquitous hip places where upbeat music overpowers your senses and you can’t, like Hemingway, get away with sitting for hours over one café crème. The marriage between writers and cafes is no longer a natural one. Gone are the days when owners welcomed scribblers. In these days of high rent and low profit margin they rather seem anxious whenever solitary, bespectacled creatures equipped with notebooks or laptops enter their establishments. But for me, this doesn’t matter much. In writing – as in many other areas of my life – I am a restless, greedy person. I need to move around. I could never, like Appelfeld, complete an eight-hour-working day amongst the humming of espresso machines. What I seek from a café is stimulation, a burst of inspiration that will feed into the rest of my writing day spent usually in several places, or at home where I wonder between the couch, writing desk and bed. This is why this Saturday morning I am drafting this entry at Rococo while gulping down warm, velvety porridge laden with honey, bananas and berries. Occasionally I move my gaze away from the laptop to take in the pleasure of Acland street loaded with flirty youth, gentle autumnal sunshine, tram rattle and treetops, that same street that was the first thing I saw on my first visit to Melbourne sixteen years ago and which made me fall in love with this city.

‘How is your book?’ A young woman from a nearby table points to A Moveable Feast, which I’m scanning through for a quote. ‘I just finished it myself.’

‘For this you’d have to be a writer,’ she knowingly smiles at me from behind her laptop. Then we let each other go back to our work.