When famous writers decide to get grumpy with their fans, one of their popular complaints is being asked supposedly ridiculous questions, such as whether they write with a pen or a pencil, or nowadays – a keyboard. The last time I heard a similar grievance  it came from Jonathan Franzen in his keynote address at the 2011Melbourne Writers Festival (‘What do you write on?’ was the question that stirred Franzen’s indignation).

But are such questions really that superfluous? I suspect those who ask them would usually also be writers and that their point would be an obvious but overlooked one: that writing – this flight of mind and imagination – is still bound with our bodies. Placing a pen or pencil in your hand, then moving it, is a physical act as is the clicking on the keyboard. Writing is a tactile experience that, alongside inspiration, requires some physical stamina. The posture we assume during the process affects this experience too, of course. Being cognizant that we write with and from our bodies can be helpful in our working lives. At least in my experience.

I, too, like fancying my writing as loftier than my modest physicality, as a separate affair. However, one day some years ago, when I felt dizzy, I took my laptop off my desk, parked myself on the couch and… four or five breathtaking hours later stared at the eight pages I‘d produced. Yes, I still remember the number – eight in total, an unbelievable bounty for a writer of my ilk, who would usually struggle focusing for more than an hour at a time. My accidental liberation from the ‘desk trap’ was an exhilarating happenstance. The curves of the couch proved to be advantageous, allowing me to write for longer. But it is not just that. The luxury of reclining transports me into that odalisque-like space of daydreaming that, as Freud once argued, writers need to foster their creativity. I still occasionally write at the desk, but now I don’t feel like this is my only option.

Some writers are even more decadent, composing their books in their beds. Truman Capote, for higher inspiration, favored the horizontal position accompanied by other sensual delights. This is how he described his working habits: ‘I can’t think unless I’m lying down, either in bed or stretched on a couch and with a cigarette and coffee handy. I’ve got to be puffing and sipping. As the afternoon wears on, I shift from coffee to mint tea to sherry to martinis.’ Whereas the memoirist and playwright Louis Nowra is one of those writers who, to be productive, need to discipline their bodies and subsequently their minds. Nowra dons a suit every morning before sitting down to work at his desk. And at the very end of the vertical writers’ spectrum resides the divine Vladimir Nabokov who wrote his books standing up by the lantern (although, he would occasionally tire and move to an armchair). The trick, it seems, is to find what works best for you rather than automatically marching to the desk, as I used to, just because ‘that’s what writers do’.

Of course, awareness of the body’s importance in the writing process does not stop at choosing a position to write. To write from the body is also to know how to activate it so that it becomes conducive to your output. To connect with our imaginations and take our minds off the self-doubt, which is so ubiquitous among writers, Anne Lamott suggests in her seminal book on writing, Bird by Bird, doing breathing exercises at the start of writing sessions. Phillip Roth prefers to walk while working on his novels; he claims to walk half a mile for every page he writes. Don DeLillo and Haruki Murakami are long-distance runners. Murakami even wrote a memoir What I talk about when I talk about running, where he explores the symbiotic relationship between running and writing in his life. He claims that ‘talent is nothing without focus and endurance’ and says it is through running that he trains himself in these skills. Dan Brown manages to remain at his desk for long periods by stopping every hour to do stretching exercises. In fact, Brown is one of the most acrobatic writers I know of. To get ideas for his plots, he uses inversion therapy – he hangs upside down, using gravity boots. Brown claims this practice (or torture?) sparks his imagination by changing his perspective. Good for those who can follow Brown’s example. As for me, I make do with the more conventional gym training. It was on the treadmill that I got most of my epiphanies while grappling with structural problems in the memoir I recently completed. 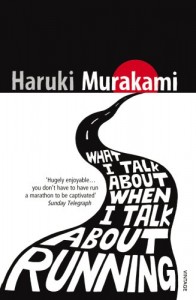 Back to the pen/pencil/keyboard question, scientific evidence shows that how we write – whether by hand or typing – affects our brain activity. According to some studies, the practice of cursive writing helps build neural pathways important for memory and complex thinking. Indeed, some writers talk about feeling more connected to their work when writing by hand. Paul Auster, for example, without getting precious, discussed his preference for fountain pens at length in an interview in The Paris Review: ‘A pen is a much more primitive instrument. You feel that the words are coming out of your body and then you dig the words into the page.’

Personally, I write much better when I use my laptop. There is something about the fluttering and the slapping of the fingers on the keys that I associate with artistic flair. It is as though I am playing piano and I feel lighter, flightier, more daring, and even grander – as if I am performing for an audience. Whereas writing by hand weighs me down, drags me back to Earth and wears me out physically. Once again, it seems, one of the most essential writing skills might be recognising and harnessing whichever method works best for each of us. So, what do you write on?