Having come from the world of music (well, punk rock, which to some might not count), I’m all too familiar with the curse of the sophomore album. A band bursts onto the scene with a killer debut only to come undone rushing out a follow-up. Critics and fans alike revel in the evisceration of their fallen idols, wilfully blind to a simple truth: the songs on that first album were written and played live over the course of years. They had a chance to mature, to be honed and cherry-picked. They survived many a setlist cull. Plus, they were born of equal parts desperation and excitement. No band can hope to reproduce that original creative context.

So, too, with books. I spent eight years writing my first novel, The Book of Dirt. Every word was considered, reconsidered, crossed out, reinstated, and revised. It became an all-consuming obsession that eclipsed my professional life (in theory, I’m a lawyer – now lapsed), my social existence (friends? I remember once having those) and even, at times, my relationship. But here’s the thing: while I was eager to be published, and signed with Text in 2014, when the book was only half-finished, I still had the benefit of letting it develop at its own pace. Nobody was waiting to read it, except perhaps my mum and a publisher’s slightly nervous accounts team. Nobody had any expectations of what it would be. When I missed my deadline (self-imposed, mind you), I had a complete collapse. I spent weeks curled up in a ball, while my partner nursed me back to semi-functionality. Then I walked away from writing altogether for the better part of a year. I took stock and rebuilt. I came back energised, excited and, yes, a bit desperate. In the good sense. I was able to finish when I and, perhaps more to the point, it was ready. All of this is the luxury of the debut novelist. 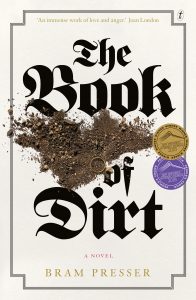 Now, a year since its publication, I couldn’t be more pleased with how The Book of Dirt turned out, nor prouder of how it has fared in the big bad world. Strange as it might seem, it feels like a sort of vindication; eight years of hell well-spent. But a writer can only rest on their laurels for so long and twelve months seems pretty close to the limit. Which means I’m on to the dreaded difficult second novel. To me, no moment feels as quintessentially definitive as this. If the debut stakes your claim as a writer, the book that comes next might just be the one that defines you. Or pigeonholes you. Or reveals you as the fraud you’ve always suspected you might be.

Second novels have a peculiar track record. Some of the greatest classics were follow-ups to not-always-successful debuts. Ulysses? A second novel. Ditto Oliver Twist, Midnight’s Children and, more recently, Life of Pi. But for every one of those, there are countless disappointments. Tristan Egolf’s Lord of the Barnyard is one of my all-time favourite first novels, but its successor, Skirt and the Fiddle, was an outright stinker and pretty much put an end to his career. Others have been crushed by the pressure for what seemed like ages: Donna Tartt, Tom Wolfe, Arundhati Roy, Steve Toltz. Ralph Ellison was 2,000 pages into his second when he died. And then there are those who just packed it in after the first. Harper Lee is the obvious example, but Emily Brontë and Katherine Dunn also spring to mind. And Joseph Heller might as well have.

I’ve often heard it said that a writer wanting a long-term career should try to start the second novel before the first one is published. After all, it usually takes some eight to ten months between a manuscript being delivered and a book hitting the shelves. There’s time! A fair few of my writer friends, much wiser than me, have heeded that advice and are already knee-deep in book number two. I, of course, missed that boat, despite having been given an even more direct warning by my editor. She asked me, as I was nearing the end of writing, what I would use to fill the gaping hole in my life that would be left by not obsessing over The Book of Dirt. Of course, she was right. But I was creatively exhausted. Even had I wanted to, I couldn’t have done it.

And so, here I am, blank screen before me, feeling an ever-increasing pressure to make something of the momentum The Book of Dirt created. Get the next book out there before I’m forgotten! In some absurd riff on the classic philosophical conundrum, the unstoppable force of that expectation crashes into the immovable wall of anxiety. Do I owe it to those who liked The Book of Dirt, those who gave it life beyond my fingertips, to write a book of equal measure? Does it require that I return to the realm of documentary fiction? Perhaps I could try my hand at something lighter. But do I even have the skills necessary for that? 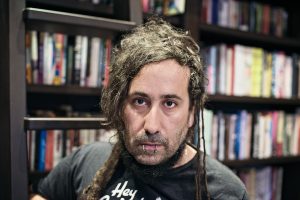 I turn to the many notepads filled with half-baked ideas that are strewn across every place I’ve ever so much as stumbled past. Some of the ideas, at some point in time, must have seemed like thrilling books-in-waiting. There’s another difficult Sebaldian family history that threatens to destroy me in the same way as The Book of Dirt did. Then there’s an oddly whimsical book that requires close to no research but the premise to which is annoyingly similar to a recent movie (fuck you, Hollywood). A series of four linked speculative fiction novellas. And a kids’ book.

Flicking through the notepads now, I wish I’d have jotted down something more substantial. I haven’t the slightest clue where I intended to go with them. Also, any time I try to give one some serious thought or, Kafka forbid, put a few words on the page, I am overwhelmed by the sense that I am somehow cheating on The Book of Dirt. Try as I have, I’m still not quite ready to let it go. Moreover, recalling the hell of those eight years, I am too scared to begin the next descent.

And so, just as I did with the first book, I find myself procrastinating. But this time I have a whole array of appealing and seemingly productive, writing-related opportunities to justify why I’m not sitting on my arse smashing out a manuscript. Panels, workshops, competitions to judge, hilarious literary salons where I read things I wrote when I was twelve, drinks at The Moat with my new author buddies, guest blog posts. You name it. I’m having a ball. Just don’t ask me how the new book’s coming along.