I’ve always loved the memoir genre. Most of my writing, be it for theater, film, poetry, song or prose has an autobiographical base. Often my fictional characters serve as vehicles for discussing those aspects of my life that I feel the need to express. If the raw emotions contained in those memories go unwritten about, I feel like I am living a half-life.

I don’t know why it is that some people are driven to put their personal stories into the printed word while others are not. Even if we don’t commit them to paper, I’ve noticed that most of us must tell our deepest darkest secrets to at least one other person. Our days are filled with – not necessarily intentional – memoiric telling: relating to others what has happened in our day, or debriefing with friends, family or counsellors when major events occur in our lives.

When reading others’ memoirs, it is not so much ‘what happened’ as how the author felt about what was ‘happening to them that I find most interesting. One of my favourite memoirists, Diana Athill, thinks that memoir writing serves a useful purpose: that if you take something that has been troubling you all your life, write about it and publish it, chances are you will never have to visit it again.

I have a few of those troubling stories lining up to be written and I’m always telling my students it’s the things you think you can’t write about that will most likely constitute a best seller. It is important also to let the writing take you where it wants to go. You may start out with a plan to write a straightforward family history but find the work has other ideas in store.

The project I am currently working on began as a travel memoir set in Vietnam, following the footsteps of my literary hero Marguerite Duras. I took the trip in 2009, making a pact with myself that I would write from the minute I got on the plane until the moment I returned. I did just that and filled notebooks with copious details of my journey. When I sat down to write about it however, other themes demanded to be explored. Now rather than seeing this book-in-progress as just a literary travelogue, I am finding I want to weave in another thread: a musing on photos I have discovered of my mother through her girlhood to adulthood which will unfold in parallel with my writing about photos of Marguerite Duras taken during the same era. My photo-musing is related to the travel story, but is set in the present and I’d rather keep the strands separate to let the connections be made by the reader, than attempt to weave them into the travel narrative. I am still experimenting with the form the book will take and I am using Duras’ novella, The Lover, as my inspiration. 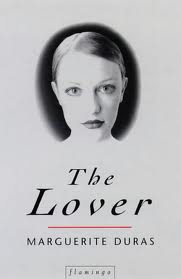 The Lover was initially conceived as a memoir, or rather – as a photo album with captions. But Duras noticed that in her album one important photo was missing; an image that was never taken but remained strong in her memory. She calls it the ‘absolute photograph’ and it becomes the central image of her autobiographical novel:

So I’m fifteen and a half. It’s on a ferry crossing the Mekong River. The image lasts all the way across. I’m fifteen and a half, there are no seasons in that part of the world, we have just one season, hot, monotonous, we’re in the long hot girdle of the earth, with no spring, no renewal.

Duras’s writing establishes this ‘opening shot’ as the fulcrum on which the story rests. As the narrative moves in and out of time with cinematic ease, it takes the reader into a fragmentary experience being inside memory with all the senses open.

I don’t yet know if I want to do something similar in my memoir, which I have entitled My Mother, Duras, but in my previous works I have often used Duras’s works as my starting point. Her writing takes me into a zone, a vast contemplative plane where at last it is possible to write in the way I always knew I should.

So far I’ve played around with a few structure versions and a while back used a blog to help me with my exploratory work: mymotherduras.blogspot.com.au Now I’m back to working in notebooks, making graphs and physically cutting and pasting fragments from the two strands. I still have way more to write although I do like the idea of ending up with a novella equivalent, perhaps I could call it a memoirette.

Jan Cornall is a writer, singer, performance poet and teacher based in Sydney, who leads international creative writing workshops and retreats in Australia and the Asia Pacific. Jan is also a sought after writing mentor. She has written fifteen produced plays, musicals, a feature film, a novel and three CDs of songs. Jan has taught creative writing since 1998 at writer’s centres, community colleges, universities (UTS, UWS) and writer’s festivals in Australia and Indonesia. Using a technique she has developed called Meditative Writing, Jan takes writers deep into their creative source. In August Jan is leading a 12 day writing journey in Vietnam following the footsteps of Marguerite Duras. Aug 16 – 30. Still some places left. Read more about this retreat and Jan’s other teaching here: http://www.writersjourney.com.au/