The novel The Hot Guy started out as a joke. My co-author Mel Campbell and I are both film reviewers, and we often go together to preview screenings as part of our job. One day we started talking, jokingly, about what it would be like to see a movie where the attractive male lead was being unknowingly preyed upon by a collection of savvy women just using him for his body. The more we discussed this idea, the more it felt there was a real story there. Maybe the joke could work as a novel. We were both non-fiction writers who wanted to give fiction a try, so we decided to write a book together.

Unfortunately, having already accidentally worked out a perfectly good method of working together (spending time in each other’s company making up jokes) we then promptly threw all that out when the work began. Inspired by the conventional wisdom that proper novel writing has to be a solitary pursuit, we came up with a method whereby we would each take turns writing a chapter, passing the manuscript back and forth between us. The one useful thing that came from this approach was that we worked out a detailed synopsis first. While Mel and I have a similar sense of humour our writing processes and predilections differ. My interest in plot and story structure meant that I took the lead early on. Now we knew where the story would go and what each of us had to do in our chapters.

One area where we are similar is that as working writers we’re usually in a position where paid work has to come first, and after battling with deadlines all week the idea of sitting down and doing even more writing – this time unpaid – is sometimes hard to face. So while we now had the spine of The Hot Guy worked out, the initial going was extremely slow, with only a handful of chapters completed after the first nine months.

At this stage it was clear that something had to change if we were going to get the book written before we both died from old age. A crisis meeting with Mel revealed that much of the hold-up at her end came from being unsure of how to go about the writing process; Mel is a much more detail-focused writer than I am, and where I’m often happy to just get enough down on the page in a first draft to move the story forward, Mel prefers to dive deep into the world being created. So we decided to meet up more often to make sure we knew exactly what we were doing, in the hope that this added attention would get us back on track.

It didn’t take us long to realise that if we were spending a few hours each week meeting up to talk about the book we were writing, we could just as easily use that time to actually write it. We put together the chapters we’d already worked on and decided to write the remainder of the novel jointly. It turned out that for the kind of story we were telling – dialogue-heavy, with a breezy, conversational style and with a whole lot of jokes – writing together was the best way to approach it.

The main goal of our writing sessions was to make each other laugh: if we were having fun, we figured there was a good chance our readers would have fun too. Once we decided to write together, we’d meet up once a week and write for four or five hours at a time. That was enough time to make noticeable progress without getting on each other’s’ nerves, and we needed lengthy periods apart to recharge our comedy batteries. We soon settled on a writing method where one of us would be at the computer typing while the other threw out jokes and ideas. It’s a good way to balance the workload: while the person not typing can let the ideas flow freely, the one at the computer gets to have the last word on what goes into the manuscript (until the other one reads it and demands their terrible jokes be re-instated). Surprisingly, neither of us became ’the serious one’; we both had similar ideas of just how silly we could allow things to get. Our main rule was: no jokes about the central relationship in the book – if nothing else, we took the leads’ romance seriously. 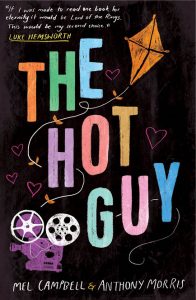 It’s been said that when two writers work together you each end up doing around 70% of the work, and that’s almost certainly true in our case. There were times when one of us working solo probably could have moved forward faster than we did together, especially when it came to the more descriptive passages of the novel – while dialogue is easy to riff on back and forth, a description of a chair or room often proved surprisingly difficult to settle on. Mel likes to luxuriate in settings and locations, describing them in great detail; I felt that the book we were writing required the kind of forward momentum story-wise that demanded descriptions be kept to a minimum.

For a while this was a problem. And generally, whether it was a descriptive passage, a plot point or a joke, we couldn’t put it down unless we both agreed on it. We’d have lengthy discussions as one of us tried to persuade the other that their approach was best. Fortunately, we had similar visions of what kind of book we were writing, which is to say whichever approach seemed funnier won out, and both of us are people who can admit when the other has come up with a better joke. It largely boiled down to being aware of each other’s styles; as we both wanted to make the book as funny as possible, we settled on trying to make the descriptions yet another source of humour. It did require a bit more effort though. With dialogue – and our book is very chatty –having two people write it was particularly effective, because we were able to act out the conversation’s back-and-forth, while the descriptions were often written by one of us with the other then going over the result.

All our pre-planning made the actual writing relatively straightforward. Occasionally we’d go back and change a few details or add in some extra set up for jokes that would pay off later, but for the most part our first draft was fairly close to the finished book. The one big change we did have to do came after we had our first round of reader feedback. Following it we added a major subplot to heighten the drama and make the stakes clearer – it turned out that having a Hot Guy as a central character worked best when his looks made the people around him act their worst. This change too we implemented together. Aside from a few minor alterations, if we weren’t in the same room we didn’t work on The Hot Guy. It’s not a book that either of us would have written on our own, though there is plenty of each of us in there (some of our friends have taken to trying to guess who wrote which jokes: they’ve been right about half the time).

On reflection, the biggest advantage, for me at least, in writing with a partner was that it made the writing process a lot more fun. Both Mel and I have our own projects to work on. Writing The Hot Guy was a good way to break our solitary working routines for a few hours each week. And in the end, we got a published novel out of it. Not bad for something that started as a handful of silly jokes in a cinema lobby on a Wednesday night.

Anthony Morris is a freelance film writer and editor. Since 2005 he has been home entertainment editor at The Big Issue, a magazine he first began writing for in 1997. He has been the film editor for Forte magazine since 1992, and is currently a regular contributor to outlets including Empire, Junkee, SBS Online and the Wheeler Centre. Other publications to which he has contributed include The Vine, Broadsheet, Spook Magazine and Kill Your Darlings where he was an online film columnist, and he has had numerous short stories published. He tweets at @morrbeat