At a crucial stage of writing my debut novel, A Superior Spectre, I travelled to the Scottish isles of Islay and Jura. I had been to Scotland three times already, but on this occasion I wanted to experience the conditions of my two main characters who spent time there: Jeff’s isolation, and some physical aspects of Leonora’s 19th century existence.

When I left Australia, the novel was almost at ‘skeleton draft’ stage. Some scenes were still missing, as was the ending, and many passages had been written quickly and featured bracketed notes such as [insert description of …] and [do this better]. I had written this draft around working part time in publishing and part time in a bar – together more than a full-time workload.

It was the perfect time to go away, to go back to the environment of the novel. It was also the perfect time to spend whole days contemplating the ‘flesh’ of the narrative, because its bones were, by now, pretty solid. But when I think back, I wonder if going away was also allowing myself time to grieve. As I had also just come out of an almost six-year relationship. To go away to an isolated place allows space for both the mind, and the heart.

The trip was financially risky. Sometimes good decisions for writing come at a cost, a cost that is hard to justify to people close to you, and even to yourself. In the two years after that trip I struggled to get on top of my debt, and the stress of that put a burden on many aspects of my life. It also meant that a feeling of foolishness accompanied each rejection from a publisher, once the manuscript was sent out – what had I sacrificed, and for what? But I did have the residue of the trip, inside me and within the manuscript, and I knew that the trip really had helped me to complete the work, as well as giving space for processing what I was going through in my personal life.

That time on Islay and Jura – less than two weeks all up – is one of my best memories. The isolation and quiet, the inability to use technology, the nature, the space around me, were all valuable in adding richness to the work. Some elements of this world are concrete: such as washing hanging over a coal stove, birds of prey and the colour of the bath water. Others are experiential, emotional, such as the sense of genuine isolation. On Jura I stayed with a good friend and on Islay with my sister, but for a few days on Islay I was completely alone, like my character Jeff. Much of what I describe in the novel about how it feels for him to be alone was scribbled in a notebook while lying in bed in an upstairs bedroom, looking out over the ocean on one side and a paddock and horses on the other, with the closest distillery, Ardbeg, not far beyond the trees.

In Orwell’s house – Barnhill – on Jura, I slept and worked in his bedroom, the one where he would sit up in bed, ill, finishing off 1984. I had a bad cough and my friend said it was strange to hear me barking from the room where Orwell would have been doing the same, because of his TB. When we were there, the generator went down for a bit, and also the filter was clogged, so we lit candles and had shallow baths with peaty water. I wore the same clothes every day and my hair went wild. I wore no make-up for a week, probably the longest time in my life since I was fourteen. We went for walks, drank gin by candlelight and talked about literature, relationships. We marvelled at how bright the stars were, seen from this remote, dark place. Some of the tiniest aspects of this experience, this existence, made their way into the work, while the escape from everyday noise (and inspiration of the literary presence of the house) encouraged focus, even confidence. 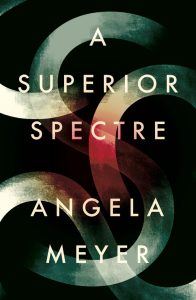 On Islay and Jura I contemplated, deliberately, the place and what it was like being there, but I also meditated. There were many moments of stillness, of being fully present in my body and environment, of quiet. The contemplation was discovering and noting how the candlelight looked on the page, and the meditation was the sound of the wind just as it was. The meditation was looking at the stars. The meditation was a warm flat rock under my back, and the contemplation was of the seal, who popped its head above the water to contemplate me too. The difference is that in contemplation my mind whirs with wonder and analysis of an object or a moment; whereas in meditation I let the thought pass through. And there was more reaching of this meditative state on this trip than I have ever experienced before.

I think trips like this are crucial to my writing, and are also beneficial to the processing of big life changes and emotions. The immersion and contemplation are overtly relevant to the manuscript, and also a mental break from the circuitous thoughts around personal dilemmas. And the meditative aspects aid the subconscious processes that build back-worlds in a writer’s mind. Calm and quiet and space allow fabric to knit in the depths of the imagination – a hammock of sorts, where both conscious and unconscious thoughts can land. This hammock is a rich source, even years later, when one is deep into a new work.

Angela Meyer’s writing has been widely published, including in Best Australian Stories, Island, The Big Issue, The Australian, The Lifted Brow and Killings. She has previously published a book of flash fiction, Captives (Inkerman & Blunt). She has worked in bookstores, as a book reviewer, in a whisky bar, and for the past few years has published a range of Australian authors for Echo Publishing, including award-winners and an international number one bestseller. She grew up in Northern NSW and lives in Melbourne. A Superior Spectre is her debut novel.

Beyond Monogamy: Love Outside the Mainstream at Wollongong Writers Festival, a panel with Paul Dalgarno & Jinghua Qian, 28th November at 11am.

I’m launching the anthology of Elwood Writers,  Every Second Tuesday via Readings. 9th December at 6:30pm.

Online in-conversation with Josephine Taylor about Eye of a Rook at Avid Reader, 9th February at 6:30pm.