I write about dead people.

Not ghosts. At least, not so far. I write fiction set in the past. It’s not the smartest career move, to be honest, but apparently I can’t help it. Historical fiction requires years of meticulous research, most of which never appears on the page. It gets stuck in a purgatory between genre and literary fiction. It also involves both writer and reader to be in a very specific agreement, to both suspend and engage disbelief. When we read fiction set in the past, we enjoy it best if we believe in it as a version of historical reality, and at the same time manage to hold in our minds the fact that it’s all made up. In turn, writers are supposed to create worlds in which ‘the past is a foreign country’ and populate them with characters that are both familiar and alien. How does that even work?

Some of the people I write about are wholly imagined, and some are based on people who really lived. Either way, there are two keys to getting inside a character from the past – giving them a credible worldview and a distinct voice. These elements are intrinsically connected to each other, and if worldview, in particular, doesn’t ring true, no amount of historically accurate description of furniture or clothing will disguise the hollow sound.

The worldview of a character from the distant past, especially, is an alien landscape. They, as opposed to the writer, don’t know what happened next – those young university graduates of 1914 celebrating the declaration of war, or the citizens of Rome confident that the empire would never fall. The young Jewish couple kissing on the banks of the Rhine and hoping the Nazi madness will pass. The minds of our characters might be filled with superstition or a steadfast faith (or both, clashing), influenced by social constraints that are hard to imagine for 21st century’s people. The values and vocabularies of people before Freud or feminism or Darwin or Descartes were profoundly different to our own.

But even with writers’ best intentions, contemporary ideas sneak into our fiction. As DJ Taylor noted: ‘Any book written a century and a half after the age it describes will betray its provenance a dozen times a chapter’. The mentality of the present inevitably seeps into depictions of the past – on the part of both writer and reader. This makes perfect sense. After all, we interpret past events in an attempt to understand them, but also to reflect on the present – historical fiction can help us do that.

The best way for writers to deal with the clash between past and present sensibilities is to recognise it and to be conscious of the process of writing and knowing, and of all the books that have come before ours, rather than pretend we are reconstructing an immutable past. As V.A. Kolve suggests: ‘We have little choice but to acknowledge our modernity, admit our interest in the past is always (and by no means illegitimately) born of present concern’. Historical fiction that’s unaware of this tension runs the risk of becoming a costume drama played by people just like us – feisty feminists in ancient Rome or Crusaders who want world peace. It’s less valuable as both history and fiction – and distorted history can be as dangerous as fake news. We don’t have to look far to see the ways in which fictional portrayals of women, for example, affect the way they are seen – or not seen at all. Think of the different ways in which Cleopatra has been portrayed over the years, usually by male writers unaware of the values they bring to their work: she is usually an evil seductress or lovesick fool, and is rarely written as a strong and capable ruler.

Voice is usually one of the first things we notice in historical fiction, and it’s one of its most hotly debated elements. People bang on about finding an ‘authentic voice’. I don’t really believe it exists – or perhaps there’s a voice that feels authentic but isn’t that at all. If I really wrote in the language natural of Elizabeth 1 or a Viking warrior, you wouldn’t be able to read my stories. The voices we give our characters aren’t authentic – they’re just familiar, rooted in genre rules we’ve applied to fiction set in the past; an accepted ‘historical’ voice created by people like Sir Walter Scott and Robert Louis Stevenson. Sometimes writers throw in a few extra thous and thees for good luck – an approach Rosemary Sutcliff used to call ‘gadzookery’.

So if our worldview influences those of the characters we create, and their voices can’t be authentic, what are the possibilities open to us as writers, to avoid rendering the past invisible or painting out the parts we don’t like?

There are several different approaches to resolve these issues, and I’ve tried them all: a modern but transparent voice with no era-specific mannerisms, so that you hardly notice it (the Geoffrey Trease tactic); a slightly more formal voice that has echoes of a past – if not the time period in which the books are set (as Sutcliff did, or Umberto Eco in The Name of the Rose); and a brashly postmodern voice that is anti-authentic – think Jeanette Winterson’s playful The Passion. Winterson, as well as E. L. Doctorow, is among the great modern masters of this form known as historical metafiction, playing modernity off against the idea of history by mixing the imagined and the real, the new and the ancient, and performing postmodernity on the page, as in Ragtime or Art and Lies. Then writers like Peter Carey, A. S. Byatt and Sarah Waters manage a masterful form of ventriloquism, channelling the vocabulary and cadence of Ned Kelly, or imagined Victorian poets, or London during the Blitz. 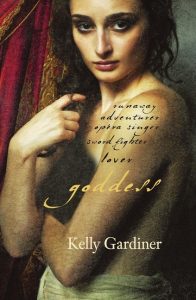 A few years ago, I wrote a novel called Goddess based on the life of the very real seventeenth-century French swordswoman, crossdresser and opera star, Mademoiselle de Maupin (also known as Julie d’Aubigny). The research took five years. I traced literary and cultural traditions of representations of women like her, of accidental cross-dressers, and of androgyny: from the ancient Amazons to kick-ass babes like Buffy. I read contemporary accounts of opera performances and the milieu in which she existed. I immersed myself in memoirs of the period and hunted down buildings, musical instruments, costumes and weapons like those she knew. I acted out the duels in my study, sword in hand. I stood in the forecourt of Versailles and the courtyard of the Palais-Royal, walked up the marble staircase from her lover d’Albert’s Paris residence, and listened as other women sang the parts she made famous.

But I couldn’t hear her real voice. The few recorded writings by La Maupin are oddly formal, either dictated to or translated by someone else, or filtered over the centuries into phrases that might have come from The Three Musketeers.

I can’t imagine a voice I can’t hear.

What I did instead was knowingly perform a version of her, on the page, in a first person voice that is self-consciously modern and Queer – juxtaposing a seventeenth century worldview with the language and sentence structure of the twenty-first. It’s unlike any of the voices previously created for her in fiction or on screen. The character it projects is an imagined pre-Enlightenment gender performance, and a woman convinced of her own exceptionalism and celebrity status. That’s the voice that sounded in my head from the first day I started writing her:

I was a star, once. Did they tell you that? I was a goddess.

Or am I just another sinner to you?

Well, shut up and I’ll tell you.

Perhaps, when we imagine the past, the voices with which we speak are always our own.

Kelly Gardiner’s latest novel for young readers is 1917: Australia’s Great War, set in Flanders and in Melbourne during the First World War. Her previous books include Goddess, and the young adult novels The Sultan’s Eyes and Act of Faith. She teaches writing at La Trobe University and is the co-host of Unladylike podcast.