I wrote my first novel Dancing with the Hurricane from the perspective of a fifty-one year old man sitting at his comatose uncle’s hospital bed. The nursing staff had advised him to squeeze his uncle’s hand and talk to him about things they did together. So he sat there recapping their lives in the hope that the uncle might still be able to hear him.

After the novel was published I kept contemplating: perhaps comatose people can hear and possibly even feel without responding? Perhaps they even have the options – to continue fighting or to surrender?

I continued exploring the theme of coma in Sweeties, my second novel that was recently published. This book is written in a stream-of-consciousness uninterrupted flow from the comatose person’s point of view. The protagonist, Abel, is in a coma, but his consciousness is active as he ponders the question some nurse asked him: Have you given a full account of yourself, Abel?

I’ve always been fascinated with the topic of what in life is predestined; what is pure chance, what can we control and how should we react to accidental surprises that happen in everyday life. Hence in this novel my central metaphor is that of a pinball machine playfield.

Throughout the book readers navigate the hazardous pinball playfield of Abel’s past life as he keeps remembering it, the DINGS and PINGS, twists and turns, a little wild and unrestrained, like a chain of school kids running holding hands. In Abel’s comatose time-travels he relives bushfires, family break ups, marriage and fatherhood – while a clock counts down the seconds of his life that he has left to live. In his foggy consciousness he’s confronted by two constants: his granny’s tray of sweeties ‘to balance out life’s nasties’; and the other two members of his ‘Pinnie Basement Gang’, his best friends, George and Roma. 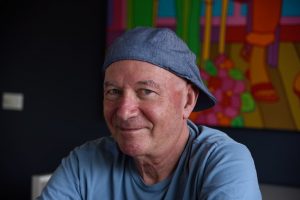 My writing has always been image based. I see the story in pictures then spend days/months/years trying to get the writing to mirror these images. With Sweeties, it took me several months to complete visualizing the images in my head before I even sat down to write one line. When the entire movie – rough version thereof – was ‘in the can’, I began. I clearly saw the reader, actually sitting there, side by side, inside the protagonist car; zooming with Abel through his past life.

When I started nailing down the Sweeties pictures, I tried several approaches to narration. First-person present tense, first-person past tense, third-person past tense – but none of these styles had the intensity I required. Once I switched to stream-of-consciousness, it started to zing.

Stream-of-consciousness can best be described as a flow-of-awareness. In my novel, where this awareness is rooted in remembrance, the protagonist is experiencing his past as so real that that he’s immersed in it. The memories are so tangible that during Abel’s travels he sometimes wraps his arms around his face to block out the images.

Once I chose how to tell this story, Sweeties had about twenty serious rewrites and seven full on edits. The first few drafts were around 68,000 words but I was uncomfortable with the ‘spread’. The finished novel is now 45,000 and when you read it you’ll know what I mean about the requirement for the tight intensity format. I tried to write this in ‘real time’, like those movies that follow the protagonist around for two full hours of his life, the camera seeing everything that he sees, the audience reacting with him.

I rewrote so many times to weed out as much intellectualising as possible. No trivia, no mud sticking to the tyres of Abel’s dream car, his Mini excitement machine, as he zooms back through time, the reader his only passenger. 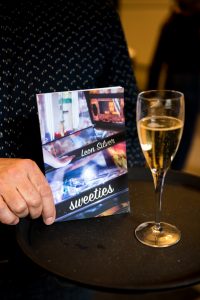 I dabbled with the idea of putting double spaces and italic bold letters to break up the flow, but then I thought, hang on, be realistic. Thought chains aren’t neat. They are continuous, they flow uninterrupted. This is also why in my novel there are no chapters, only sections reflecting where Abel is in terms of his memory and thinking.

Stream-of-consciousness writing creates the emotional intensity I was after, but it also has its downside. The attentiveness this requires from the writer is exhausting. The involvement is so penetrating that I sometimes feel I have to ‘do the right thing’ by the protagonist, let him have the journey that is rightfully his rather than imposing my own whims upon him.

I found the answer to the problem of exhaustion in what is generally called in fiction authors’ circles as ‘creating and crating’. I spent a few months on the Sweeties drafts then I put them away in the ‘vault’ for a while. This happened quite a few times and it had to genuinely be ‘out of sight out of mind’.

This ‘separation’ is two sided. The time away from me gave the Sweetie characters a chance to get to know themselves and each other. They started talking, discussing their worlds and asking each other, ‘How do you feel about all this?’ … When they worked out their differences and agreed to continue the adventure, they knocked on the door and resurfaced for another stint.

After the first two ‘crating’ breaks, the characters started taking over the venture. This meant that they had morphed into ‘real’ people, not fictionalised automatons. Some characters even started juggling for pole position. Granny Annie – a minor influence to begin with – kept elbowing her way towards the story’s front. She figured that in his comatose position her grandson Abel wouldn’t notice – but I did! Yet I let her get away with this.

As you can see, I chose the stream-of-consciousness path, even though it’s probably the hardest road to publishing. Publishers tend to be nervous about this style of writing, as it requires perseverance from the readers to get through the first few pages. But I think readers also get rewards from reading works like these, as when they are done well, they can really engage you being so intensely visual and letting you so closely into another person’s mind. I’ve already had some positive feedback on Sweeties, including favorable ratings on GoodReads. Readers are yelling in my ear: it’s so visual, make it into a movie.

I think, if you have a story to tell – an image to pass on – present it your way, in your voice, even if it needs to be written not in the most accessible style. Then find the right publisher to share your vision.

Leon Silver was born in Shanghai, grew up in Israel, came to Melbourne in the mid 1950’s. His work was in fashion but he’s been writing for all of his life. His first novel, Dancing with the Hurricane, published by HarperCollins, is set in post-World War II Europe, Shanghai, Israel and Australia. It was also bought by an Israeli publisher and translated into Hebrew. Sweeties, his second novel, published by Lacuna, is written from the comatose person’s point of view. He’s now braving it as a full time writer with three more novels in his top drawer.