I’ve never been very good at keeping things simple. When I write, I have more ideas swirling around my head than kites at a traditional Japanese festival, and invariably they get tangled up.

Similarly, when I came up with the idea for my book Men on the Menu: 75 Delicious Affairs around the World, I found it impossible to stick to one clear, definitive genre, without radically compromising the essential concept. I wanted to combine three of my greatest passions – travel, food and men – in one memoir that recounts the story of how, after separating from my long-time partner, I went gallivanting across the globe in a frenzy of wining and dining and dating as many men as I could. I hoped to get an insight into each country’s national dishes, and… well…their national dishes. And if there was one that was particularly tasty – a man I mean – then heck, I’d be asking for a doggy bag!

Apart from hoping to find love, I was wanting to cobble together a publishable tale. But upon which shelf would it sit in the bookshop?

So having decided to come up with a whole new genre – Chaos – I set off on the trip, intending to just see what came out the other end.

And it all worked out rather nicely. At first.

In each place I visited, I would record in great detail my impressions of the city, its architecture, the urban landscape; I wrote about the smells of the boulangeries, the colours of the souks, the sounds of the seagulls. All these little things that give places their individuality.

In each place I visited, in my search for the national dishes I would bravely tuck a serviette into my collar and tackle the raw prawn’s brains, the pig’s penis in the feijoada, the sheep’s intestines stuffed to bursting with other bits of innards. I would describe the tastes, the textures, the strange odours, and even the indigestion from which I invariably suffered the next day.

Everywhere I went, I would have either a pre-arranged date with a man (via friends with contacts right around the world), or I would meet someone myself en route: in bars, hotel lobbies, airports. I would ask them a great many questions in order to find out who they really were beneath their Armani suits and t-shirts, their variously coloured skin and accents.

Then, once I got back home, exhausted from three months of over-stimulation on every level imaginable – physical, spiritual, emotional, and mental – I tried to fit all I’ve experienced together. To make some sense of it all and build up a coherent story. Which, I discovered, was a bit like trying to cook a meal with a whole bunch of ingredients I’d grabbed ad hoc out of the larder and the local greengrocer – it was either going to be surprisingly delicious, or a total disaster.

After a year of failed attempts – too sweet, too sour, too bland – I was advised by a publisher in my 26th rejection letter that perhaps I ‘needed some help’. Stung, I couldn’t imagine how an editor could possibly help me. After all, they hadn’t been there with me, had they? How could they advise what ingredients to keep in, or to take out?

Enter Lee Kofman. She not only shared my passion for travel, food and men, but she knew how to write. Beautifully.

But most importantly, Lee had an idea how to successfully combine all three of my chosen genres so that the book didn’t read like I’d just shoved all the words into a cast-iron pot and hoped for the best. She patiently guided me through the process of first taking out all the ingredients that were unnecessary, such as characters who didn’t really contribute to the story, or sentimental musings of no great relevance to my themes; how to then make a clear distinction between each key ingredient, and to honour them, by appropriately peeling, trimming, dicing, cooking them all together in batches to maximize the overall flavour, yet to still extract the essence from each morsel. Sometimes I needed to add more humour or dramatise the narrative, and finally, I went through the book one last time tightening up the conjunctions, adverbs and adjectives. 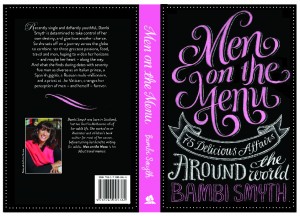 And what we ended up with, several months later, was a manuscript that was true to my original vision of mixing genres, but which now also appealed to publishers. Shortly after finishing it, I received a two-book contract. .

It was still unclear though to what shelf Men on the Menu was best suited – but we just decided to leave that up to the booksellers. And across all the retail outlets I’ve visited, I’ve found my memoir in a variety of sections: Autobiography, Non-fiction, and, you guessed it – Travel, Cuisine and Romance!

Bambi Smyth has been going on journeys all her life – physical, emotional and spiritual, and writing about them with passion and humour is her greatest joy. An author and illustrator of 14 children’s books (Penguin, Reed, The Five Mile Press, Random House) she is also a freelance designer, specializing in toys and upmarket wildlife souvenirs. More recently she has started writing for adults, publishing two creative non-fiction books – Men on the Menu: 75 delicious affairs around the world and Bad Hair Year (The Five Mile Press).