Once, I was a full-time writer.

My day began at six, with coffee and a slice or two of fruit toast. I’d ruminate on character arcs and plot developments as though they were the very stuff of life. If time permitted, I would air-drum my way through any number of songs by early, Gabriel-era Genesis. Or, if I was desperate, something off Invisible Touch, writing all the way.

In 2013, my wife and I ushered our baby boy, Oscar, into this world. During the birth, he had swallowed meconium, and would have died were it not for the immediate action of an obstetrician so in control that she already had a takeaway coffee in her hand… at six pm. On a Saturday night… in Joondalup: a suburb so sleepy that it may have once moonlighted as one of the seven dwarves.

Things changed soon after. My 6 am clock-on was replaced by an ever-changing medley of wake-ups between 11 pm and 5 am, dependent on Oscar’s cries.  Each time I’d slide a travel mattress off of the cupboard and onto the bed, as well as wipes, a nappy or three, and the dreaded feeling I was about to open Oscar’s nappy to some bowel-based purgatory from which I might never be fully cleansed.

He often liked to pee on his mum while being changed, which is even funnier than it sounds. Even when he peed on me, I couldn’t help but give a wry smile as if to say, ‘You got me. That was a good one.’

Days and nights became a mix of sleeping, changing, stressing, and driving mindlessly around Perth’s northern suburbs in the hope that the motion might give Oscar cause to giggle, sleep, or hibernate, for say, six months or so.

Early on, he would only calm when I sang ‘El Scorcho’ by Weezer while also doing figure eights around the dining table and couch. Well, that’s not strictly true. He’d also calm when my wife sang ‘Locked out of Heaven’ by Bruno Mars. The jury’s still out on Christina Aguilera…as indeed, it should be.

I sucked quite profoundly as a Dad, or I rocked, in that I tried really hard to be good at it. I read books with names like, ‘Up the Duff’, ‘Why are you Crying?’, and ‘Seriously, I’m about to lose my shit here.’

I was the dad. This meant I reminded my wife that once we’d had sexual and social lives. It meant I helped out too, putting on nappies at first like a man with no thumbs, and then gradually so that they stayed on the baby’s bottom.

I would occasionally venture out with Oscar to the park, or a local café. I’d be told how good a dad I was on more than one occasion, which meant that I was not putting him in immediate danger.  I looked good with a cloth slung over my right shoulder, I guess; a gentle rock seemed simpler than the cleaning up of yet another chuck on the floor, of feeding and sustaining a young body. 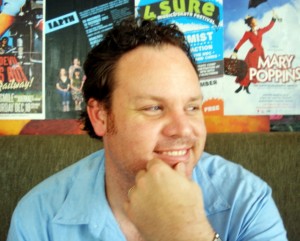 In all of this I was supposed to be working on my novel-in-stories, You Belong Here. Except that I wasn’t.

I would come back to forty-six drafted stories about the Slaters – the young parents, and their baby boy, Alex. I’d wish I’d written some bullshit about elves and dragons. Anything to get away from the double-helix threads of life and writing that so effortlessly intertwined.

At twenty-five years old, I dreamed of the day my debut novel would be published. At thirty-seven, I dreamed of Oscar sleeping through the night.

Being a writer, you get to play make-believe. Being a dad is unmistakably real. No wishful thinking will disguise the milk your bub just chucked up.

Writing is choosing to get up early, or to stay up late, to ensure that you’ve shown up to complete your work. Parenting is showing up, not when you choose to, but when you have to. There are no days off, or if they are, they need to be planned, discussed and green lit by your partner.

Oscar is asleep as I write this. The house is quiet, eerily so. When writing, I now have to listen to music on my headphones. A house without noise feels empty, lonely, and strangely static to me.

I’m a dad-writer, just slightly above being a dad-mime, in terms of current earning ability. Up till now, I’ve constantly and continually backed myself, writing for love while working for pay; scrawling stories on the back of receipts while delivering cartons of beer to old men whose houses smelled of boiled beef; mastering my craft while the rest of the state rode the mining boom.

I’m intricately connected to Oscar. I miss him on my days at work; get near tears when I’m away for more than a day. I live for his smile, the way he giggles when I tickle his chin. The look on my wife’s face as I hold him close, guide him down to the ground; let him hold my index finger in his hand, and walk me from room to room.

When writing, I think of him, and sometimes write for him. My next novel, The Bear – which charts a man’s search for forgiveness in the face of all he’s done – is infused with Oscar, or at least, the love I feel for him. For me, writing has always been about living, and vice versa. Going into this next stage of my life, it’s even more so, and thus I seek to meld the father and the writer.

The book comes in fits and spurts. I sometimes only get to write at three, four in the morning, time wise not unlike during those first few days of caring for Oscar. So for all my talk of the differences between writing and parenting, I’m struck by similarity. By the love that gets you up; that keeps you coming long after you should have already crashed.

Showing up is what we do, as writers and as parents.

Laurie Steed is an author, teacher, manuscript assessor, and reviewer. His stories have been broadcast on BBC Radio 4 and published in Best Australian Stories, The Age, Meanjin, Westerly, Island, The Sleepers Almanac and elsewhere. He won the Patricia Hackett Prize for Fiction in 2012, and is the recipient of fellowships from The University of Iowa, The Baltic Writing Residency, The Elizabeth Kostova Foundation, Varuna – The Writers’ House, Writers Victoria, The Katharine Susannah Prichard Writers’ Centre and The Fellowship of Writers (WA). He lives in Perth, Western Australia. More information at: http://www.lauriesteed.com