‘Remember that novel I wrote, inspired by our open marriage?’

‘Well it’s finally being published. As a memoir.’

‘Don’t worry. I’ve turned you into a beautiful character.’

‘Just what I always wanted. To be a character.’

That phone call with my ex-husband was certainly one of the more difficult conversations I’ve ever had. A version of it appears in the epilogue to my book Fallen: a memoir about sex, religion and marrying too young. It’s a scene in which I try to rationalise and justify what I’ve done. Looking into the mirrored wardrobe doors in my study, the late afternoon sun coming in through the window and lighting up my artificially red hair, I wonder if I’m some kind of monster for using my friends and family in my work.

‘I have to be honest with you, I feel incredibly exposed,’ said this man I once married; a man now married to someone else, and living a devout Christian life on the other side of the country. I still speak to him affectionately, several times a year and sometimes on Twitter. In my book I have turned him into ‘Isaac’ and told the story of our most intimate betrayals of each other twenty years ago when we were young and in love and trying to work through sexual problems that tore us apart.

I never set out to write a memoir. I’ve talked elsewhere about the painful and nerve-wracking process of turning my novel into a memoir; the terror of owning this tricky material as my own story.  Told in the first person, my book is narrated by ‘Eve’. She’s young and hungry and tells the truth, about herself and others, even when it’s ugly. When I first wrote ‘Eve’, I felt free to let her say and think anything because she wasn’t me, she was wearing the modesty veil of fiction. Now the book is called a memoir – albeit a fictionalised one, stating on its first page that there are ‘parts made up and fragments rearranged, like a dream half-remembered’ – but it can be found in the Non Fiction and Biography sections of bookstores. I’m naked on the page.

Being naked on the page is is all very well for me, because I’m the writer, wielding control of the story, and perhaps, after all, I am some kind of exhibitionist, stripping for my audience. But what about my friends and lovers, my mother and my ex-husband? Have I stripped them bare too?

Here’s another late afternoon conversation with one of my ‘characters’. I’m sitting at my dining table surrounded by snowy drifts of paper, a pen in my hand as I edit the latest draft of the book. Beside me, drinking milky tea and wearing his magnifying spectacles, is my dear old friend and former lover, the man called ‘Jay’ in the book. He’s a writer and critic himself, and he dissects the text with a fine eye, speaking the dialogue out loud to see if it rings true. ‘This line here,’ he says, marking up the manuscript, ‘Jay would use the word “appalled” instead of “disgusted”.’

‘But would you?’ I ask, impressed.

And there’s the thing: not everyone minds being turned into a character. Some people even like it, or at least tolerate it with good humour. (‘Just don’t give me a small dick,’ joked ‘Jay’ when I first told him I was writing the book).

My two best friends – ‘Esther’ and ‘Claudia’ in the story– joke about the excesses and idiosyncrasies of their characters. ‘Esther’s such a total bitch!’ says the charming and complicated woman who inspired her, as she pours us all another glass of red wine. ‘But it’s actually very accurate,’ says the brutally honest ‘Claudia’, adding, ‘At least Rochelle didn’t give you wide hips and make you an orphan!’

‘You’ve immortalised me, Chelle!’ said my first love Marcus when he read the chapter that describes how the two of us met at fourteen, lost our virginity at seventeen and met up again in our twenties for a passionate re-visitation. ‘It’s perfect. You captured it exactly how I remembered it,’ he said, drawing on his cigarette and looking off melodramatically into the distance. He’s always had a gift for self-mythologising. I wonder if it’s true, if my memories really match his, or maybe his own memories are so hazy now that I’ve merely created solid versions for him to latch onto.

My book was eight years in gestation, and right from the start I told those of my friends who appear in it that I was writing a novel inspired by that period in our early twenties. They were my closest friends, so how could I keep something so momentous from them? They read drafts when I was ready, and gave small criticisms and large encouragements. When I told them the work was finally being published as a memoir, they each took a pause and then offered congratulations – along with hopes that none of our parents would read it. 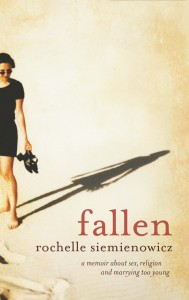 So far, the parents have chosen not to read it. So far, nobody’s angry. I’m lucky and I know it, and I’m not sure how long I’ll get away with it. I feel incredible guilt a lot of the time, along with the pride and defiance that come with knowing I’m a writer who needs to write, and this was the story I had to tell. I take courage from Anne Lammott’s wry words in her wonderful book Bird by Bird: Some Instructions on Writing and Life:

Remember that you own what happened to you… Just put down on paper everything you can remember    now about your parents and siblings and relatives and neighbors, and we will deal with libel later on.

Perhaps intention is everything. Maybe, if you write your real life ‘characters’ from a place of love, or with a desire to tell the truth as you see it – never for revenge or to settle a score – you’ll be forgiven for many a betrayal. It helps of course if you paint yourself with as much honesty and brutal detail as you do the others in your life, and if you foreground your status as an unreliable narrator. Here’s what I’ve said to all the characters in my memoir: ‘This is just the way I remember it. I turned it into a story, with parts made up and fragments rearranged. It’s true, but it’s also made up.  So please keep talking to me.’

Rochelle Siemienowicz is a film critic, journalist, editor and columnist. She has a PhD in Australian cinema and was the long-time film editor for The Big Issue. Her work has been published widely, including in The Age, Kill Your Darlings, The Big Issue, ScreenHub and SBS Movies. Her first book is Fallen: a memoir about sex, religion and marrying too young (Affirm Press). You can visit her website and blog here.