Lee Kofman is a straight talker. When she told me – over a refreshing beverage in South Melbourne – that she felt I was too hard on myself as a memoirist, my inward response was to bristle. I’d just written what could be loosely described as an addiction memoir, Woman of Substances. Essentially, it is my back catalogue of misdeeds, spread across research-heavy chapters about the unique issues of women who use drugs and alcohol. I didn’t go light on the ugly.

‘You didn’t linger on any of your achievements either,’ she pointed out. (Okay, fine, here’s my LinkedIn page.) ‘Many women don’t when they’re writing memoir, and the risk is you lose that balance.’

Being English, I demurred quietly and took a tight-lipped sip of my drink to indicate I had moved on. Secretly, I was making this list.

Lee’s right – I offer a one-sided view of my life in Woman of Substances. Traditionally, the addiction memoir takes the shape of the hero’s journey: a descent to rock bottom and then the stairway to redemption. That’s not the case with my book, in which I wind up neither completely sober nor spiritually enhanced.

There are three reasons I omitted my life’s moments of sweetness and decorum.

Firstly, throughout the writing of Woman of Substances, I deliberately inhabited the age I was recalling – which in turn was influenced by the substances I was taking at that age. There’s little room for measured self-reflection when you have a bulbous, fragile ego that’s powered by amphetamines: ‘There was a whole other world going on that these squares knew nothing about, and it was pinging around in my reward pathways’ (me, aged 21-and-a-half).

Secondly, as I noted before, I’m English. Self-deprecation is our currency. We stick the boot into ourselves first, before other people can, and we’ll find a way to turn everything into an alarming joke. To earnestly examine the ‘authentic self’, achievements and all, is just so… American. Rupert Everett put it most succinctly in his debauched memoir, Red Carpets and Other Banana Skins: ‘I behaved like a cunt.’ 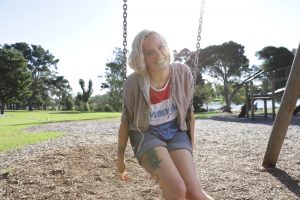 Thirdly, I’m just not wired to look back on my life positively. To illustrate this point, I opened the book with a chapter about temperament – or as I titled it, The Petri Dish of You. In this, I referenced studies that found that the features of childhood temperament most likely to be predictors of adult substance use are inflexibility, poor self-regulation, low resilience and high-reactivity. Tick! Tick! Tick! Tick! As I wrote, ‘My default setting was: “Expect nothing and be pleasantly surprised.” Addendum: “Any pleasant surprise will be a massive fluke and should be dismissed as such.” This is why you should take my account of childhood and run it through your own sunshiny filter, adding a leafy suburb here, an idyllic seaside holiday there, The Morecambe and Wise Christmas Special on the telly, and being read the adventures of Winnie the Pooh every bath night – because those things were there, too.’

The truth is, I felt very judgemental about myself when writing Woman of Substances. Even though I’d quit drinking for eight years, which allowed for much self-improvement, this was the first time I’d even allowed myself to look back at a certain period of my life. Quite a large period, actually – late teens to late twenties. It wasn’t just ugly; it was shocking. In writing about my seemingly indefatigable pursuit of humiliation and my inability to learn from mistakes, I experienced those things again, almost as if they were new. It was a tricky situation. I knew I had a responsibility to my intended reader – someone questioning their own drug and alcohol use – to not let that judgement openly seep into the copy. But at the same time, it undoubtedly underpinned it.

It’s been uncomfortable, then, to go through the press cycle and find myself presented as a tragic victim. Invariably, I’ve been introduced in articles and on the radio with a ledger of the most unfortunate things that have happened to me – as though I had no agency. Didn’t I spend chapter after chapter describing my own ill-thought-out exploits? Apparently not. I guess my view of myself as the narrator is inherently different to that of the journalist – although the readers who have written to me found my antics all too relatable.

So Lee is correct in that the narration doesn’t offer balance. My response to that is that the tipping of the scales is deliberate. At the last moment, before filing to the publisher, I did add a concession in the acknowledgements section, noting that Woman of Substances is a memoir of drug-and-alcohol use, not a memoir of a girl. And at the very beginning, too, I warn of this personal bias:

‘In my memory, it’s like Nordic noir: everyone’s withdrawn and secretive, the sky is overcast, and people drift about wearing thick woollen jumpers (Dad never turned on the central heating). At any moment someone’s liable to walk out into a snowdrift and never return. But I am not the most reliable witness.’

Jenny Valentish is the author of the Walkley-nominated Woman of Substances: A Journey into Addiction and Treatment (Black Inc) and also of the novel Cherry Bomb (Allen and Unwin. She is the former editor of Time Out Melbourne and Triple J’s Jmag and a regular contributor to the Sydney Morning Herald, the Monthly and the Guardian. She studied Alcohol and Other Drugs at Turning Point/Monash University and is one of the core team of AOD Media Watch, dedicated to improving the reporting of alcohol and other drug issues through the critical analysis of media stories.