For the past few years I’ve been writing a work of creative nonfiction that brings together memoir and research. It tells the story of a period of time in which I was blindsided by overwhelming postnatal anxiety and felt uncertain about the value of a decade of self-inquiry that I had undergone through psychoanalysis. This experience sent me on a quest to explore what current-day scientific investigations are showing us about Freud’s theories of the human mind.

My father is a psychoanalytic therapist, and my mother and he forged their teenage relationship on a shared valuing of psychoanalytic thinking. Even after they divorced, psychoanalysis remained their lingua franca. I grew up feeling, as Janet Malcolm put it in the Purloined Clinic, that ‘life is lived on two levels of thought and act: one in our awareness and the other only inferable.’ It was a given for me that there was an unconscious, in the vein of Freud’s unconscious – a part of my mind, of all our minds, that harboured thoughts and feelings I wasn’t aware of, and that inhabited my body and dreams and speech in ways that had to be deciphered to be understood.

But the anxiety I experienced after becoming a mother seemed to have such obvious physiological origins – the shock of labour, sleeplessness, hormones, the unrelenting demands of breastfeeding,. I struggled to understand my sudden drop into panic postnatally as originating in my unconscious mind. What value had all that time on the couch been if I was still such a mystery to myself?

It turned out, as I began to write my book, a different, less internal, line of inquiry also arose for me that tied in with these questions: my science-minded sister and my father had begun to debate the scientific validity of psychoanalysis. My sister wielded forth research and data and the sharp cut of words like efficacy, and my father shook his head and talked about denial and defenses. I now wondered, Freud had set out as a neurologist with scientific aims, but was his work, in the field of the mind, compatible with scientific inquiry at all? Or was psychoanalysis really something unmeasurable – perhaps a kind of art, a creative piecing together of a narrative of our self? And did it work?

There was a huge amount of research material I wanted to get into that connected with what lay at the core of my story: Was there validity to the psychoanalytic idea that our bodies can manifest what goes on in our minds? What did other fields of study have to offer about my postnatal experience – genetics, biology? And while I was asking these questions I came upon a field called neuropsychoanalysis, which tried to resolve the problem of science in relation to psychoanalysis. I grew interested in what I could learn there about my own life and about the world of therapy at large. 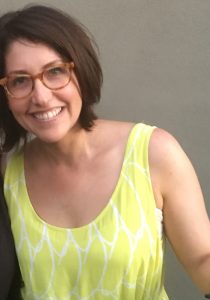 So I was faced with two converging threads of story: one personal and one to be dug out in research and reading. But how on earth would I bring all this material together meaningfully, and in a way that would interest a non-specialist reader?

I had in mind as models the works of writers like Eula Biss, Geoff Dyer and Leslie Jamison, as well as Helen Garner and Janet Malcolm, all of whom seemed able in different ways to navigate interiority and investigation beyond the self, to bring research and cultural interrogation together with a compelling personal story.

Carrying this off is the greatest challenge I face as I proceed with this work. What structure will pull the reader along with my story but also engage them with the intellectual ideas I am exploring?  For a long time I’ve struggled with what felt like two separate strands of voice and form: I‘ll have a few days of memoir writing, and then look back on what I’ve produced with horror, thinking: ‘That is way too introspective!’ And then I’ll have another few days of research-based writing and I’ll read back on it and think ‘This is way too dry and academic! Boring!’ Success seems to come when I loosen up, and by this I mean I allow myself, much as one hopes to do in psychoanalysis, to write what feels important at the time and to bring together, without self-imposed constraints and rules, what seems to link.

Active, conscious writing strategies I have tried out to bring greater ‘looseness’ to my work include:

– Changing my primary storyline to past tense to allow more movement in my narration. In past tense, I found I could bring in my research material more seamlessly.

– Trying out a structure that moves from a rigid placement of the story arc (one main through-line of personal story interspersed with research chapters) into a looser placement in which my story weaves in and out of research within each chapter.

– Writing personal story without self-censoring (Rachel Cusk’s sage words have helped with this: ‘If you want people to like you, don’t write.’), and then cutting it back according to what is relevant to the greater point I am looking to make and the research I have done, not according to whether or not others might judge me on what I have said.

I also find that continuing to read widely across different forms and genres as I write is essential to producing the kind of both personal and inquiring work I am aiming for. So, I read poetry, novels, psychoanalytic case studies, scientific papers and creative nonfiction as I go, and I constantly draw on the parts of those works that excite me to feed my work in different ways and challenge how I am writing. Sometimes I drop my academic voice and bring in the wilder, associative quality of poetry; other times I use the strategies of a novel to move my story along; and sometimes I draw on the clear, logical execution of a science paper to make a point.

I don’t yet have the answer to my own questions about structure, but I know that for the kind of book I am writing – the kind that takes as a central tenet the value of the unconscious mind to creative endeavour – I have to give myself over to what the poet Keats famously called negative capability: a state of not-knowing in which I accept feelings of uncertainty rather than reach for fact or solution. This, according to Keats, is how to best arrive at poetry. Or creative nonfiction.

Nicola Redhouse is published in Best Australian Stories 2014 and 2015, Meanjin, Kill Your Darlings, Review of Australian Fiction, The Big Issue and most recently the anthology Rebellious Daughters (Ventura Press), among other places. The manuscript she is currently writing is funded by an Arts Victoria and an Australia Council grant. She also works as a book editor, specialising in literary nonfiction. She can be found on Twitter @peezlered