Ten years ago I was awarded my first writing residency in Australia. At that time I was living at a crazy pace, juggling several jobs, studying for my MA and trying to write a novel. Oh, and I had a husband too to attend to. But here I was offered an oasis of two weeks amidst all my busyness – two weeks at Varuna, set in the gorgeous misty Blue Mountains with their spiderwebs and flowers, with no daily hassles (and no husband), just me and my novel. That was my idea of heaven. When the time came, I dragged my suitcase up Varuna’s steep pathway framed by trees teeming with plump cockatoos, eager to set my fingers into the typing motion, greedy for all those hours stretched ahead of me.

It was summer, but it rained heavily on my arrival. I blamed my first unsuccessful day of work on the gloom of the weather. Later in the week, when the rain stopped, I blamed my lack of productivity on Varuna’s library, full of so many good books that I began questioning the point of writing anything new. And so it went. During those precious two weeks of residency I produced some work, but nothing I wrote seemed worthy. I sat in Eleanor Dark’s studio overlooking the large garden brimming with roses in bloom, feeling despondent and lonely. Eventually I gave up writing and decided to use the time for reading, with the hope this would bring some inspiration. I picked wonderful books by Gail Jones, Sasha Soldatow and Brian Castro, but they only depressed me. I felt I couldn’t learn from them, because good writing suddenly became a mystery which I was unable to solve. So what else could I do with all those hours I had? I took long walks in the mountains. I bought a sleeveless dress with blue flowers. I called my husband many times a day. I left Varuna feeling my life was devoid of writing, and therefore of meaning. I did have a good dress though.

I didn’t know it then, but this writer’s block would last for three painful years during which my dominant feeling was that something about the soul, the essence of writing, eluded me. I felt I wasn’t smart enough to produce good work and tried to write as if I was smarter than myself, which of course was a recipe for failure. I produced some publishable works, but I hated everything I wrote and indeed a lot of what I wrote was pretentious rubbish. But some stuff that I hated and filed away I later re-read and it was good enough to use in my recently published memoir. I know now that during those three years more so than my writing ability I lost one of the writer’s most important assets – the skill to evaluate one’s own work. Without that I felt disoriented, lost in the deep dark wood of my own words.

Few subjects are discussed as much among the writers as writer’s block. However, there is little consensus not just about the symptoms and remedies of this affliction, but even about its very existence. The American novelist Ann Patchett, for example, a prolific writer, thinks that writer’s block ‘is a myth.’ In her view, as she writes in her collection of essays, This is the Story of a Happy Marriage, writer’s block is just an excuse lazy writers use, because it is ‘a magic label. Writer’s block is out of our control, like a blocked kidney. We are not responsible.’ 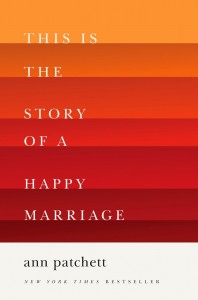 To my mind, Patchett’s attitude comes from sheer luck – she just never experienced writer’s block. Writer’s block has little to do with procrastination, or so-called laziness. In the years when I suffered from it I wrote for just as many hours as I do in happier times. The difficulties associated with writer’s block are much greater than putting off writing by doing laundry and dishes. Writer’s block is more of an existential crisis, which in my case meant that loss of credible self-evaluation, and also loss of hope. I felt then as if good writing had become a secret I was incapable of uncovering.

Phillip Pullman, the British fantasy writer, does believe in the existence of writer’s block, but he is even more judgmental than Patchett: ‘Writer’s block is a condition that affects amateurs and people who aren’t serious about writing.’ However, many writers damn serious about their work, and brilliant too, experienced that awful affliction – Mark Twain, Hemingway, Fitzgerald and Anne Lamott among them. Some even find the experience of writer’s block to be useful (if only I could belong to their ranks…). Ray Bradbury, the American writer who wrote across many genres, took feeling blocked as an indication that he was working on the wrong project and it was time to move on. Similarly, Orson Scott Card, the American science fiction author, says:

Writer’s block is my unconscious mind telling me that something I’ve just written is either unbelievable or unimportant to me, and I solve it by going back and reinventing some part of what I’ve already written.

I think it’s just a lazy-thinking kind of cliche, this idea of writer’s block. In a very obviously lavatorial way, it suggests that you’ve got something in you and you can’t get it out because of the blockage… Whereas I’ve gone through phases where I just haven’t had anything to say… And I’ve gone through phases where I’ve dreaded the idea of writing. Writer’s dread.

But isn’t writer’s dread just as intrinsic to the writer’s block phenomenon as its ‘lavatorial’ component? My own writer’s block did seem lavatorial, because I had an awful lot to say, but couldn’t find the right form to say it in (that novel I was trying to write eventually became a memoir I did write and got published). Yet what underlined my choice of working on the ‘wrong project’, as Bradbury would say, was fear. I chose fiction to recount my romantic failures because I dreaded exposing myself and others involved, yet the fictional medium wasn’t right for what I had to say. Gradually my fear, and my wrong choices, corroded my confidence.

Researchers who have studied the phenomenon of writer’s block have found evidence that links it to changes in brain activity, where under particularly strenuous professional or personal circumstances those parts of our brains linked to creativity get disrupted and shift to producing symptoms of anxiety. These are reversible changes, yet they can be lasting and highly distressing. It is possible my own case of writer’s block – being so pervasive and enduring – belongs to this category, particularly as those years when I was blocked were also the years of my marital difficulties. My writing picked up again shortly after that relationship dissolved. It was then that I finally discarded my novel and began writing the memoir. Gradually my writer’s block lifted. This doesn’t mean writing comes easily to me. It never did, has been always bound with procrastination, fear and self-doubt. Nowadays, the ghosts of those three dreadful years haunt me too, even when I am highly productive. I think I lost some innocence, some security that my ability to write is a permanent attribute. And yet, nowadays I also feel somewhat more optimistic that I won’t fall under such a lengthy spell again, mostly because during the time of – I dare say – my recovery from writer’s block, I discovered some strategies that have helped me to prevent or minimize this affliction. Next month I’ll discuss the strategies I use and also those drawn from experiences of other writers.