I have met quite a few writers who, like me, have written novels, plays or collections of poetry within the framework of a PhD.  The motivation for writing within the University is sometimes a scholarship, which offers financial support for research and writing. Given how hard it is to make money as a writer, or a sessional academic (my other money-spinning job), the lure of three years of full-time writing and a weekly income is hard to resist.

For writers who have continued down this path, the requirement to write a critical essay or exegesis as part of the degree might be considered a tiresome hoop to leap through. I have a somewhat different view.

Let me say that I hesitate to have my personal experience function as advice. I have no definitive advice about writing, in or out of universities. I always feel I have achieved far less than I should have, and I that I have had an altogether irregular pathway in life. But for me, a PhD (and my Masters before it) was a way of managing the two things I wanted to do: create works of art and teach in a university in a secure position. In this way, I could support my family while also getting some writing and thinking done, and contributing to the teaching culture of the university.  Both of my novels have been written from within the university. My first novel, Cusp, emerged from a Masters at Queensland University. The second, Extinctions, was part of my PhD at UWA. I would never have finished Extinctions without the scholarship, but also without the structure put in place by my excellent supervisor, not to mention those inexorable departmental ‘milestones’ which rose up every few months, demanding I tabulate my progress and flag any shifts in direction.

More so, being in the university under a higher degree structure helped me to begin my novels and forced me to end them. As you might have guessed, I have a peripatetic mind (let’s just call it ‘a strong interest in interdisciplinarity’). I have always struggled with beginning and ending projects. It is thus no accident that both my novels and the critical essays that accompany them engage with questions of where ideas come from and where they end up.

I wrote Cusp after researching the plot structure of the Bildungsroman, the traditional novel of education, where the young man overcomes obstacles and emerges into adult selfhood and self-knowledge. In my exegesis I explored contemporary versions of the ‘novel of education’, featuring a young female protagonist who usually has to ‘kill off the mother’ to find herself, or at least leave home to discover her ‘true self’. In contrast to these novels, Cusp begins not with escape, but with homecoming. The protagonist, Lena, reluctantly returns from New York to a place that looks a lot like Perth, where she has to renegotiate her relationship with her mother. Instead of spreading her wings and flying away, Lena faces the limits of what she can be and where she can go. These limits are prescribed by her gender, her class, and the historical moment in which she lives. Her mother, she realises, is very ill.  She needs her daughter. Lena loves her mother, and she will stay.

My PhD was a very different experience to my Masters. Somewhere between starting my Masters and publishing my first book, the goal posts were shifted, and I learned that I had to have at least a PhD and publications to get a permanent academic job. I was getting old; I had precarious employment, a family, and my parents and my mother-in-law were all ill. So I enrolled into a PhD (again with a scholarship) primarily to get the qualification (but also to write my second novel).

Higher degrees by research can be lonely affairs, and caring for my family split my time. I rarely met other PhD students, and did not attend seminars and workshops, as I had done in my Masters. I just didn’t have time.

My new project dealt with complex areas that I was struggling to work out. Extinctions had many beginnings. During my PhD I tried to shape the different threads of these ‘beginnings’ into a meaningful form. I was writing a novel about change and death (or ‘retirement’, as one recent reviewer wrote of Extinctions – which may well be a euphemism for death in our times). There were many decisions to make about character and plot, all political/ethical choices – at least they were for me.

The novel grew out of my work in a history museum and a heritage site, and from my performance writing around objects, memory, and colonisation. It was also inspired by my family background. My father was an engineer and Frederick Lothian, the protagonist in Extinctions, is a retired Professor of Engineering, specialising in thin-shell structures. Adoption has touched my family, and I am a white Australian living in a country marked by colonial violence, past and present. Caroline, Frederick and Martha’s adopted daughter, is Aboriginal, and struggles with her position in the family and with the trauma of the past. 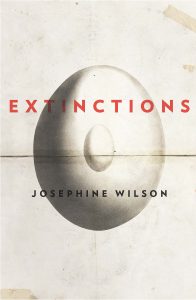 For me, the commitment I made to thinking about these things through a PhD was not just ‘academic’ in the negative sense that this word is sometimes used.

The analytical tools of the academy – the skills, distractions, follies, indulgences, challenges, call them what you will – helped me to deepen my both novels. One example of how theory fed my writing has to do with the character of the mother in Cusp. She is an airhostess (as was my own mother). Engaging with feminist writing about embodiment and the feminine helped me to see how the glamour of mobility and female lightness exemplified by the idea of the air hostess masks a cruel industry that extracts emotional labour without recompense, and asks of the female body that it mask the cruel and discriminatory conditions of its own, seemingly effortless, labour. This new thinking led me to deepen my characterisation of the mother in the story, and to describe better the tensions in the daughter’s relationship with her mother.

How else did the university help me? Well I have a PhD, and I have two novels. My latest novel is receiving excellent reviews. But I am still a sessional teacher. I discovered that having a PhD does not make an academic career any easier; the Humanities is increasingly under threat by the commercialisation of the tertiary sector, where the ‘outcomes’ are less tangible than say, in the sciences. So it may well be that the idea of the University is something I am finally ready to give up on. But what I will still retain the skills it helped me develop – to build structurally complex (and readable) novels about things that press hard upon me.

Josephine Wilson is a Perth-based writer. Her writing career began in the area of performance. Her early works included The Geography of Haunted Place, with Erin Hefferon, and Customs.  Her first novel was Cusp, (UWA Publishing, 2005).  Josephine has lectured and taught in the tertiary sector.  She is a sessional tutor and lecturer, and teaches in a Humanities Honours Program, in Creative Writing and in Art and Design history. Her novel Extinctions (UWA Publishing, 2016) was the winner of the Dorothy Hewett Prize and is currently longlisted for the 2017 Miles Franklin Award.